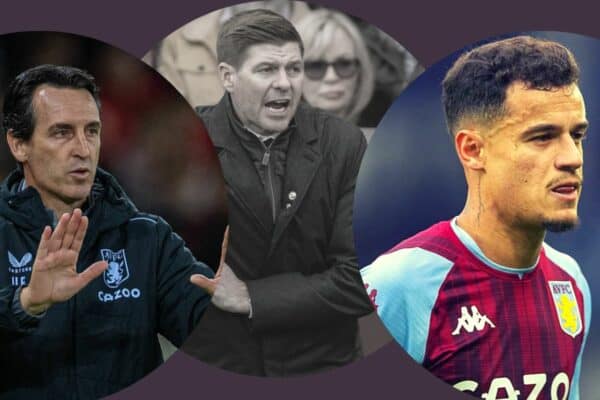 “Appalling” under Gerrard, Coutinho “so poor” and why Villa vs. Liverpool will be close

The Reds returned to action with a League Cup defeat at Man City on Thursday, but league commitments take precedence this season.

Jurgen Klopp‘s men have a tricky Boxing Day assignment up next, with Villa buoyed by the arrival of Emery, who inspired his side to victory over Man United before the World Cup.

Every game feels huge in the top-four battle, which has every chance of going to the wire in May, so victory would be significant for Liverpool.

With kickoff almost upon us, we spoke to Villa fan and writer Crippy Cooke (@CrippyCooke) to hear all about the season to date, Emery, the Reds and more.

How would you assess Aston Villa’s start to the season?

We had an appalling start under Steven Gerrard, with only two wins from our first 11 Premier League, and were looking over our shoulder in the bottom half of the table.

Things have improved since he was replaced – three wins from our last four games – so I’m very optimistic again.

How happy are you with the appointment of Emery?

I was pleasantly surprised at the appointment and have been delighted with our performances under Unai Emery, so I’m confident he can steer us in the right direction.

He’s a very good coach, having won European honours with two different clubs while taking three sides to the final, and should have clout in the transfer market so we can strengthen in January.

There were some who felt Gerrard deserved more time to get us out of the mire, but the majority would have replaced him if they knew Emery was available.

The board clearly remain ambitious.

Leon Bailey has shown glimpses of magic, but he has issues with consistency and fitness.

Danny Ings has finally found his scoring boots and is popping up at important times, while Ashley Young is a model professional and has run back the years with great performances.

I won’t pretend I saw this decline coming, but I wasn’t jumping for joy when we turned his move permanent after he flattered to deceive on loan last season.

It’s little wonder Barcelona were desperate to cash in for considerably less than they paid.

Philippe Coutinho hasn’t scored a goal or registered an assist this season and he was dropped before getting injured.

There are nine players in the squad who create more chances per game than him, so we’re not a better side with him on the pitch.

Woeful, by their standards.

Last season, Liverpool lost just two Premier League games out of 38 – this time around, they have already lost four.

Suffering defeats to top-six clubs like Man United and Arsenal can happen, but the Reds have been beaten by Nottingham Forest and Leeds.

To be sixth in the table and 15 points off top spot after only 14 games speaks volumes about the season Liverpool are having, but I’m positive they will improve.

I’m hoping Villa can secure a comfortable top-half place outside of the European spots.

Arsenal, Man City, Newcastle, Tottenham, Man Utd, Liverpool and Chelsea are likely to finish above us, so that means eighth is the best we could do.

I still think Liverpool can finish in a Champions League spot.

They will only be four points adrift if they win their game in hand and I would be surprised to see Newcastle and Tottenham hold them off for the entire season.

Which Reds player who you most like to have at Villa currently?

He’s obviously not fit right now, but took little time to shine in England and would be a fantastic acquisition for most clubs.

Villa need economic wide forwards, so Diaz or the also-injured Jota would be my pick.

Looking ahead to Boxing Day, where will the key battles take place?

Aston Villa’s left side against Liverpool’s right flank could be key to deciding the outcome of Boxing Day’s clash.

Lucas Digne could be in for a difficult afternoon with Mohamed Salah cutting inside and Trent Alexander-Arnold on the overlap.

Digne wasn’t having the best season for Villa before Emery replaced Gerrard, but he might be more confident keeping them at bay now.

Villa boast three wins from their last four home games and face a Liverpool side that have lost two of their last three away games, but both teams are coming into the game off the back of two consecutive wins overall.

It will be close.

Only three Premier League clubs have drawn more games than Liverpool this season, too, so I think it could be a stalemate.