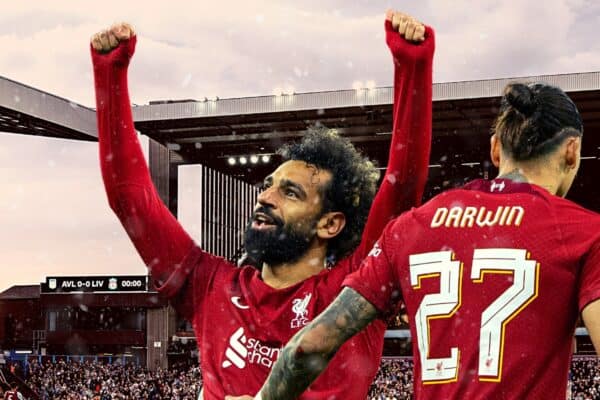 Liverpool are no strangers to delivering belated Christmas joy and we’re hoping for more of the same today, and Mohamed Salah could be crucial to that once more.

In all competitions, Mo Salah has five goals in his last five games against Villa.

And the Reds have won more times at Villa Park than they have at any other ground in the Premier League as the visiting team.

Plus, Liverpool have also scored more goals in their league history against Villa (334) than they have against any other team.

The last time Liverpool played on Boxing Day was in 2019 when they came back from winning the Club World Cup to record a 4-0 victory at Leicester.

They have scored 13 goals in their last three Boxing Day fixtures and have kept five successive clean sheets on this day since a 2-1 defeat at Man City in 2013.

And these teams have met once before on Boxing Day with Liverpool winning 2-1 at Villa Park in 2001.

Liverpool have won all 10 games this season in league and cup when they have scored the game’s first goal.

And they could win a third league game in succession for the first time this season after wins against Tottenham and Southampton.

But the Reds have kept one away clean sheet in the top-flight – at Goodison Park in the Merseyside derby, with their only away league win of the campaign at Tottenham.

Could we see some landmark moments?

Villa sacked Steven Gerrard back in October following after 38 league games in charge, winning 12 and losing 18.

Since Unai Emery took over last month, Villa have won both league matches – defeating Man United 3-1 at home and winning 2-1 at Brighton.

Unai Emery has faced Klopp’s Liverpool seven times, he won his first as Sevilla boss in the 2016 Europa League final. But since then he has lost five of the six encounters, including both Champions League semi-final legs last season with Villarreal.

Today’s referee is Paul Tierney. He last reffed Liverpool in their 1-0 defeat at Nottingham Forest back in October.