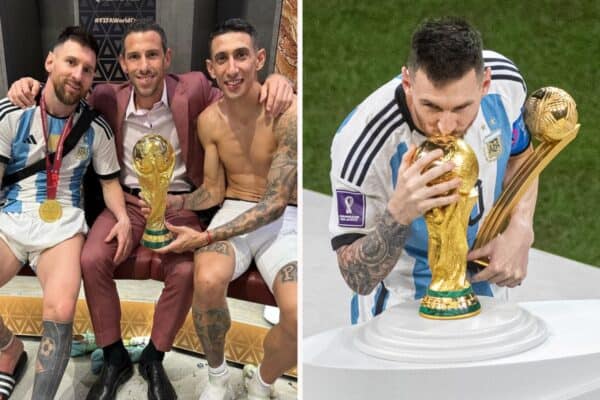 The status of Lionel Messi as the greatest of all time was sealed on Sunday as Argentina won the World Cup, with Luis Diaz among those full of praise.

Despite those who have come before him, and even those who have stepped through the Shankly Gates over the years, it is hard to argue Messi’s place among the elite.

A brace in Sunday’s World Cup final, along with a penalty in the decisive shootout, earned the 35-year-old the last major trophy required to complete the set in a remarkable career.

It came at the expense of Ibrahima Konate, a late substitute who almost forced a winner for France in stoppage time, but the wider footballing world saw it as a deserved victory.

Messi was paraded around the pitch in Lusail after the ceremony, and taking to Instagram at the same time, Diaz hailed the Paris Saint-Germain forward.

“All is said,” the Colombian wrote. “Football owed you.”

Diaz was among those to applaud Messi on his own post on Instagram, too, joined by a player he helped knocked out of the tournament, Virgil van Dijk.

Kostas Tsimikas, Alex Oxlade-Chamberlain, Arthur, Calvin Ramsay, Stefan Bajcetic and Daniel Agger also liked the message, while a host of youngsters lauded him in their stories.

Ben Doak and Paul Glatzel labelled him the “greatest of all time,” with Leighton Clarkson hailing “the best ever” and Max Woltman insisting there had “never been a debate.”

A number of Liverpool legends took to social media to issue praise to Messi, too, with Jamie Carragher ranking him above Diego Maradona, Pele, Cristiano Ronaldo and Zinedine Zidane in his all-time top five:

Congratulations to Messi and Argentina. What an incredible achievement and moment in football. #Qatar2022 | #FIFAWorldCup pic.twitter.com/uo6YVnq6as

Maxi Rodriguez, meanwhile, was present at the stadium and joined Messi and Angel Di Maria in the celebrations in the dressing room:

While it may have been a night, from a Liverpool perspective, tinged by Konate’s heartbreak, there are times in sport when individual brilliance can be respected regardless of club ties.

Messi is undoubtedly one of the greatest, is not the very best, and a breathtaking final between Argentina and France only hammered that home.