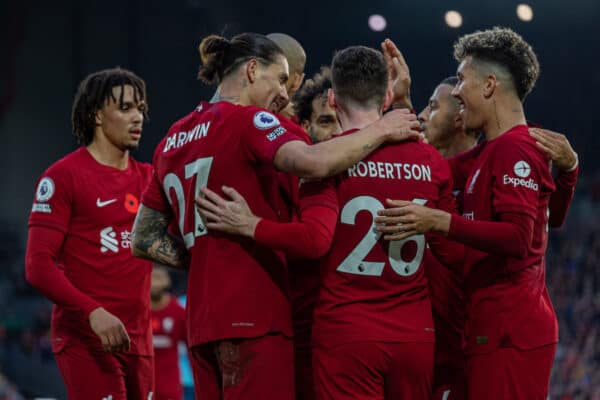 As Liverpool rally from a record-breaking – in the worst way – start in the Premier League, where can they be expected to finish in 2022/23?

At the beginning of the campaign, Liverpool fans were anticipating another tilt at the Premier League title.

What followed was the club’s worst-ever start to a season under Jurgen Klopp.

By the time Leeds scored a last-minute winner at Anfield on October 29, expectations had swiftly been revised.

Even the Reds’ baseline of Champions League qualification is currently uncertain, with the club sitting in sixth, seven points behind the top four, during the World Cup break.

With the long-awaited return of club football upon us, now is the perfect time to ask ourselves what the realistic aim for the campaign should be.

Should we be fuming with fourth? Should we be made up with a cup? What does success look like?

As tempting as it is to look at a club’s history or name brand, simply being a ‘big club’ is a terrible criteria for judging results.

One useful starting place, which also illustrates this, is projected points totals.

This is where we look at each team’s current points per game and extrapolate it across 38 games to estimate their final tally.

As we can see, currently the likes of Liverpool, Man United and Chelsea are projected for disappointing seasons, while comparatively small club Brighton will gatecrash the European places.

However, looking purely at past results is an example of the ‘hot hands fallacy’.

A basketball player who has scored several baskets in a row is considered likelier to score the next one because they have ‘the hot hand’.

But the 1985 study found that previous results were not a good model for predicting the future.

For that, we’re better off looking at underlying numbers.

This data shows that Liverpool are not unlucky – they have almost exactly the number of points that performances have deserved.

What this data shows is just how much more competitive the league has been this year.

The likes of Brighton and Newcastle are expected to shake up the established top four – in fact Brighton fans should be disappointed with their points total based on the data – while surprise package Arsenal are leading the league.

Liverpool being sixth isn’t solely down to their own performances.

So what does this tell us about our targets?

If all goes according to the data, a relatively low 67 points would be enough to qualify for the Champions League – for only the second time in the last five years.

If Liverpool’s performance levels persist in the second phase of the season, they’ll only be narrowly off the points total required, despite being well below the high standards that recent top-four sides have reached.

Essentially, they do need to improve – but they don’t need to be at their best to make up the gap.

In fact, 67 points would be the second-lowest tally of Klopp’s tenure – yet it would likely be enough for top four.

So, provided they attack the restart in a positive way, Liverpool can sensibly target top-four qualification.

Without forgetting the three cups still to play for, Champions League qualification would be a success this season.

But is there any hope for those of us who still want to dream higher?

We can see from the data above that the title race between Arsenal and Man City will likely be decided by a significantly lower points total than we’ve become accustomed to.

We can suppose this because, while Arsenal’s current points per game would see them amass 100 points, the underlying numbers suggest they should see a regression in the near future.

Especially considering their main striker, Gabriel Jesus, has been sidelined for the next three months with injury.

It’s at this point we should explore the concept of ‘breaking the model’.

This is where elite teams never regress to their underlying numbers, and instead regularly perform better than expectations.

This usually comes down to having world-class individual players, momentum and good fortune. For example, Man City have scored nine goals more than expected so far thanks to the clinical finishing of Erling Haaland.

Because City have proved that they can break the model in the past few years, we should expect them to sustain their current overperformance and look at their projected total of roughly 86 points.

Arsenal have yet to prove they can do this under Mikel Arteta, so we should stick to their expected total of roughly 86 points.

Their race could be a tight one, decided by head-to-head games or big moments. But one thing we should be confident about is that neither side will end up in the high 90s for points.

If you wrote Liverpool off in the title race because you couldn’t see them getting 99 points again, you may want to carry out a quick reappraisal.

Attacking the title…surely not, right?

Could Liverpool still get 87 points and win the league after all?

At this point, it would require taking 65 points from the 72 remaining. Only seven more points could be dropped in the next 24 games, having already given up 20 points in the first 14.

It would certainly require a consistency that the underlying numbers do not project.

However, without suggesting Liverpool have the hot hands, they do possess a squad of incredible individual quality which has broken the model in four of the past five seasons.

Many of them were involved in the 19-game unbeaten run last season, reducing a 14-point gap to one.

That turnaround also came later in the campaign than the current World Cup pause.

Factor in a second pre-season with most of the squad and potential January reinforcements, and the case suddenly becomes fairly strong.

Is it a smart, data-backed bet? No.

Are you still allowed to hold on to hope? Absolutely.