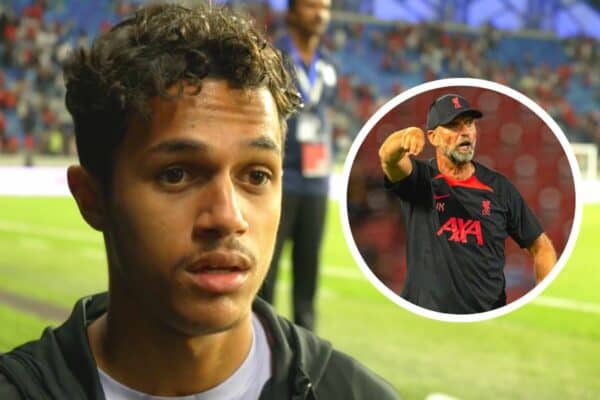 Fabio Carvalho only arrived at Liverpool last summer, but says his team-mates are keen to get back into a vital habit they mastered last season.

The ex-Fulham youngster scored just 40 seconds in to the Reds’ 3-1 defeat to Lyon on Sunday, having started the game on the left side of Liverpool’s front three.

That goal came about after the Reds pressed high to force the Lyon defence into an error, something we have become accustomed to seeing from Jurgen Klopp‘s side in recent years. It is a trait, however, that Liverpool have struggled to perform to the best of their abilities this season.

Speaking before the game, Klopp said he had been showing his team video examples of their pressing game from last season.

Carvalho claims those clips have been helpful, as Liverpool look to regain their best form going into the second half of the season.

“For me it has certainly helped because we have been looking at videos from last season and obviously it has helped,” he told LFCTV after the game.

“We want to get back to pressing how the team pressed last year, which was very useful in games and we created a lot of chances from it.

“We haven’t quite been at the level pressing-wise this year and it’s something we’ve been working on and will keep working on. Hopefully we’ll be back to our best.”

Many believe a lack of intensity off the ball has been the root cause of Liverpool’s issues so far this season, so it was encouraging to see the team excelling in that aspect in the first half against Lyon.

As Klopp began to ring the changes in the game, the Reds struggled to maintain their efficiency when out of possession, but Carvalho says it’s something the team will continue to work on.

“One hundred per cent, that’s what we’ve been working on all week and obviously it paid off today.

“We could have done it more often and we just need to tidy up with little tweaks and together we can do it.

“Like it showed today in the first minute, it paid off and we’re going to keep working on that.”