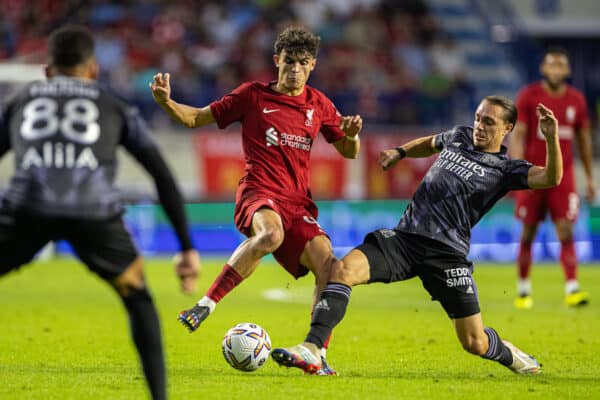 Liverpool were beaten 3-1 by Lyon in their Dubai Super Cup opener on Sunday afternoon, and were also on the losing side of the penalty shoot out, but fans were encouraged by the performances of several youngsters.

Fabio Carvalho gave the Reds the lead after just 40 seconds, with Jurgen Klopp‘s side flying out the traps in the early stages.

Mohamed Salah had the opportunity to double Liverpool’s lead from the penalty spot, only to see his spot kick saved, before Lyon benefited from the wholesale changes Klopp made to his team as the game progressed.

A brace from Alexandre Lacazette either side of a good goal from Bradley Barcola secured the win for Lyon, before Calvin Ramsay‘s penalty miss also saw the French outfit win 5-3 on penalties.

As is always the case with friendlies, though, the result here was irrelevant, and Liverpool supporters were encouraged by what they saw from several youngsters.

Bajcetic has attributes of “a top, top player”

Midfielder Bajcetic was the only youngster to start in what looked like the strongest possible team Klopp had available to him, and fans liked what they saw from the Spaniard, while Ben Doak:

Impressive half from Stefan Bajcetic (18) in Dubai. Uses the ball well, nice appreciation of space. Still needs to improve physically but that's just a matter of time.

Lovely pass out by Bajcetic to Robertson on another forward run. Stefan's made some really good tackles too while Robertson has been a frequent threat. Those two have done well first half, as has a number of others.

Once Bajcetic fills out more, he’s going to be special. Looks for the ball, short/long, movement, positioning, has the attributes of being a top top player. 18 ??. #LFC

“Why I never bother with friendlies”

On the whole, aside from a good first 30 minutes from Liverpool, it certainly wasn’t the most entertaining of encounters at the Al-Maktoum Stadium:

Just been reminded why I rarely bother with pre-season friendlies. The “penalty shoot out for an extra point” feature really added value to the experience.

Champions of the Dubai Super Cup, we'll never sing that.

You really know these penalties are only a bit of fun because Klopp is actually watching them haha. In important penalties he's often turns away and preferred to look at crowd or staff reactions.

One of the other few positives from the game was Naby Keita‘s involvement, with the Guinean yet to kick a ball in a competitive game this season due to injury. Let’s hope his return isn’t a short-lived one!

Lyon too good in the second half for Liverpool and run out comfortable winners. Klopp will be happy to get game time back into Naby Keita, valuable experience for some youngsters too. Thought Liverpool's 'stronger' team would have won this but credit to Lyon. Tete impressive

The Reds are to face AC Milan in the second of their two friendlies in the Dubai Super Cup on Friday, with Darwin Nunez due to rejoin the group on Monday.