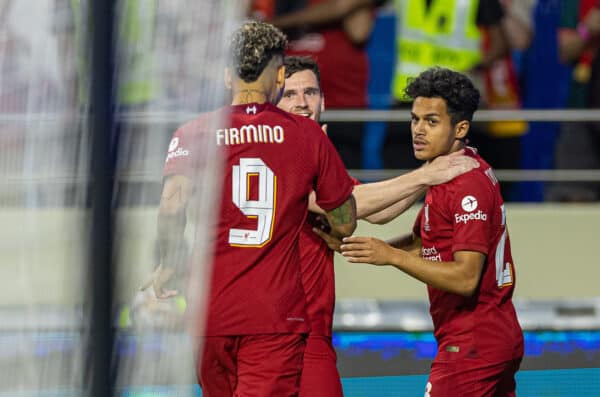 Liverpool started strong and faded away when key players were brought off, as they suffered a 3-1 friendly defeat to Lyon on Sunday.

Within 40 seconds of their opening friendly of the break, Liverpool rewarded the semi-full stadium in Dubai with a goal.

It came through fine pressing play with Roberto Firmino, setting Mohamed Salah through for a simple ball across to Fabio Carvalho to tap in for 1-0.

Lyon were out of sorts all over the pitch and the Reds looked to capitalise with lovely sweeping play, and they had a big opportunity to double their lead when Firmino was brought down in the box, but Salah’s penalty was saved well.

Liverpool were forced into an early change just before the half-hour, with Harvey Elliott shaking his head as he was replaced by Melkamu Frauendorf, indicating a fitness concern.

There were few openings for Lyon in the first half, but they were handed a gift just before the break as a mixup between Andy Robertson and Caoimhin Kelleher allowed Alexandre Lacazette to roll it home and equalise.

After an unplanned change during the first half, there were six planned substitutions at the interval, with Adrian, Nat Phillips, Kostas Tsimikas, Calvin Ramsay, Bobby Clark and Alex Oxlade-Chamberlain all coming on.

The alterations did, of course, affect the fluency of the game, though Tsimikas was impressive from the off as he came in at left-back.

More came on the hour, with youngsters Luke Chambers, Dominic Corness, Ben Doak and Layton Stewart all coming on along with the returning Naby Keita, making his first appearance since August.

Lyon took the lead soon after, with lovely work from Rayan Cherki, dancing through challenges, allowing him to tee up teenager Bradley Barcola to make it 2-1.

Lacazette then gave Lyon a two-goal lead late on, as a young and inexperienced Liverpool side struggled against established senior players.

Regardless of the result, the tie was going to a penalty shootout due to the rules of the Dubai Super Cup, with Lyon winning 5-3 on spot-kicks after Calvin Ramsay saw his effort saved.