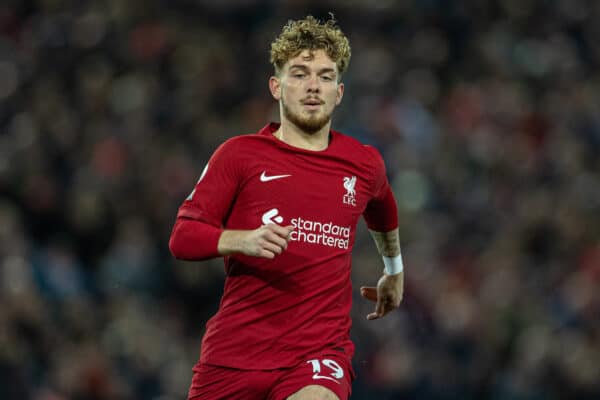 Harvey Elliott has been a mainstay in Liverpool’s side so far this season, and it’s no wonder with the 19-year-old now feeling “back to my normal self.”

Elliott is the only player to feature in each of the Reds’ 22 games to date in 2022/23, amassing 1,258 minutes – the seventh-most of any member of Jurgen Klopp‘s squad.

That’s nearly double the figure the teenager reached last season after a serious ankle injury enforced a five-month absence, stopping his momentum in his tracks.

But with a regular place in Klopp’s XI and matchday squad, three goals and an assist, Elliott’s confidence is on a high and it coincides with his mindset of being “free to go and play football.”

“I think the start of last season compared to this season, there was a big change,” Elliott told the club’s official website when asked if he feels he’s taken a step forward in his career.

“Obviously, I had my injury last season but when I came back it was a bit up and down, in my opinion, in my performances, in training. I wasn’t really feeling 100 percent.

“But this season I feel like I’m back to my normal self, back to how I was last season at the start – just free to go and play football, to enjoy it and just to go and express myself, show the world what I can do and who I am.

“I’m just very thankful for the opportunities obviously given to me.

“There’s many more to come hopefully and it’s just down to me to take each and every one, to perform to the best of my ability and show the team, show the world, show the fans that I’m able to be in the team at such a young age.”

At the end of last season, Elliott accepted he had not been at his best during training and was not doing enough to force Klopp’s hand – but that’s clearly changed.

He is expected to feature against AC Milan in the final friendly in Dubai on Friday after avoiding injury against Lyon, in what Elliott described as a “frightening” knock that, thankfully, was nothing serious.