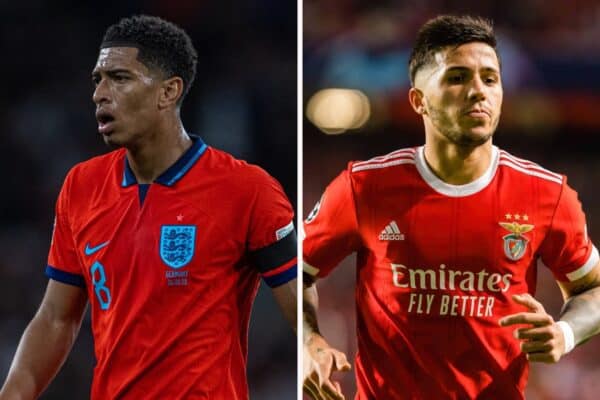 How Liverpool could afford both Jude Bellingham AND Enzo Fernandez

With claims that Liverpool are interested in Dortmund’s Jude Bellingham and Benfica’s Enzo Fernandez, could they afford both high-value midfielders?

As Liverpool plan for reinforcements in their midfield, Bellingham and Fernandez have been presented as two viable candidates in the summer transfer window.

Both deals are touted for fees over £100 million, however, leading to the assumption that it would be one or the other brought in.

Bellingham is widely regarded as the priority target, with the club putting in the legwork off the pitch when it comes to convincing the 19-year-old ahead of talks with Dortmund.

But Fernandez has emerged as a popular option among supporters, particularly following his standout performances for Argentina on the road to the World Cup final.

According to widespread reports, Dortmund will look for a fee of around £100 million for their No. 23, while Fernandez has a €120 million (£103.2m) release clause in his contract with Benfica.

Given Liverpool’s outlay in the last four seasons has never exceeded £100 million – across both the summer and winter windows – there are understandable doubts over the club paying over £200 million for two midfielders in one window.

But that is not to say they couldn’t afford to do so, as explained by football finance writer Mo Chatra on Twitter.

IF Liverpool were to sign Jude Bellingham and Enzo Fernández at a combined cost of £200m or more, financing the deals would be feasible. Signing both would not require the full amounts to be paid at once to Dortmund and Benfica respectively.

Crucially, this is due to the nature of football transfers being built around amortisation, or in other words, spreading the cost of a fee over the course of a player’s contract.

“If, for the sake of argument, Liverpool agreed to sign both players for €120m each (£206m combined), Liverpool could structure both deals to be paid over three instalments,” Chatra wrote.

There is also the suggestion that Fernandez’s buyout clause may not represent the final fee if negotiations with Benfica come to a more viable conclusion.

Either way, though, the club’s recent outlay compared to their turnover indicates that they could, in fact, absorb a club-record double deal.

That was £450m in outlay during just three years.

Chatra notes that existing payments, for the likes of Ibrahima Konate, Luis Diaz and Darwin Nunez, are unlikely to breach £100 million for the next financial year.

It is also pointed out that Liverpool had set aside significant funds for French midfielder Aurelien Tchouameni last summer, only for the 22-year-old to opt for Real Madrid, joining the Spanish club for £85 million.

“Funds should be available from last summer when the Tchouameni deal fell through and a permanent alternative signing was not secured,” Chatra adds, with it “never a case of Tchouameni or Nunez.”

Of course, based on experience it still seems highly unlikely that Liverpool would sanction an outlay of over £200 million for two players in a single window.

That is regardless of Bellingham’s generational talent and the growing belief that Fernandez could become an elite midfielder in the years to come.

However, it should be pointed out that prior to those last four seasons, in 2018/19, the club spent £170.5 million to bring in Fabinho, Naby Keita, Xherdan Shaqiri and Alisson.

In 2017/18, there was another £160 million committed to deals for Mohamed Salah, Andy Robertson, Alex Oxlade-Chamberlain, Dominic Solanke and Virgil van Dijk.

More often than not, Liverpool’s self-sustaining model has required sales to fund signings – which is not out of the question in the summer ahead.

But further funds will be freed up as big-money contracts for Keita, Oxlade-Chamberlain and, possibly, Roberto Firmino and James Milner all expire on July 1.