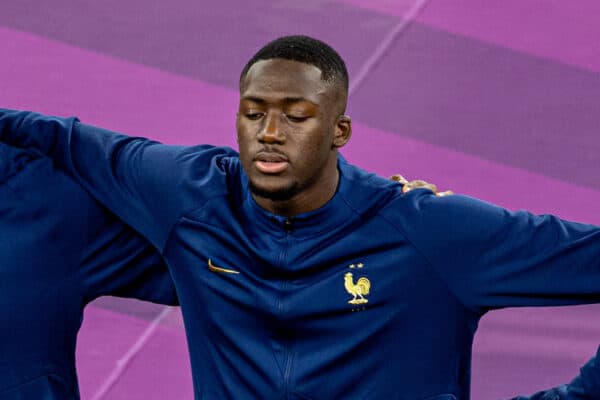 It was heartbreak for Ibrahima Konate as France fell to a 4-2 shootout defeat to Argentina in a dramatic World Cup final, with the Liverpool defender playing only the final seven minutes.

Liverpool’s No. 5 had been in doubt before the final after catching the virus that had spread throughout the French camp, and he was ultimately named to start on the bench.

His former RB Leipzig teammate Dayot Upamecano was instead preferred as the left centre-back alongside Raphael Varane, who Konate had taken the place of in the semi-final.

A truly captivating final over 120 minutes and a shootout followed, starting with France first being pulled apart by Argentina in the opening half.

Lionel Messi opened the scoring from the penalty spot after Ousmane Dembele was adjudged to have impeded Angel Di Maria, with the Barcelona winger subsequently subbed off after just 41 minutes.

His withdrawal came five minutes after Di Maria scored Argentina’s second goal after a sumptuous team move – with Olivier Giroud joining him in an early exit before the break.

Deschamps would make a further two substitutions in the second half, neither being the introduction of Konate, as he searched for any spark to get his side back into the game.

And his side would find a way, Kylian Mbappe scoring twice in the space of a minute, first from the spot, to make it 2-2 with just nine minutes of the 90 remaining – the momentum firmly with France.

Extra time beckoned and the drama continued, with Messi scoring with 11 minutes remaining before Mbappe notched his hat-trick with another penalty – Konate introduced in the middle of it all – to take it to a shootout.

And Argentina were triumphant for the third time in their history, the first for Messi, to deliver heartbreak for Konate, winning the shootout 4-2.

Konate played 292 minutes throughout the tournament over five games and was the last remaining Liverpool player in the competition.