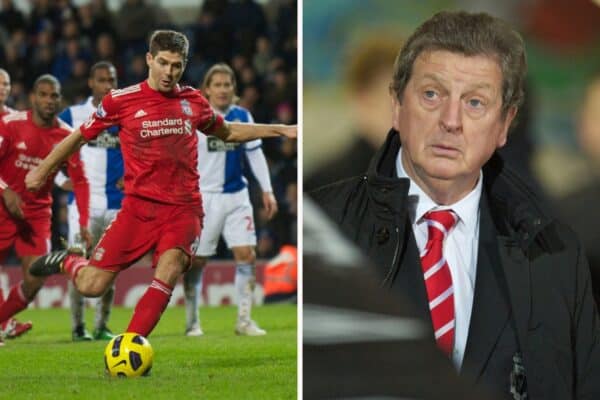 It was a popular theory at the time that Steven Gerrard purposefully missed a penalty to get struggling Liverpool manager Roy Hodgson sacked.

Hodgson was in the throes of an abysmal reign at Anfield when Gerrard stepped up to the spot in a Premier League clash with Blackburn.

Liverpool were ninth heading into the tie, and defeat would see them slip to 12th, with the Reds having won only seven of their previous 19 games in the league.

Blackburn took a commanding lead through Martin Olsson’s opener and a Benjani brace, but Gerrard looked to mount a comeback with an 81st-minute goal before he was brought down by Michel Salgado with four minutes left to play.

The captain fired his spot-kick well over the bar and the Reds lost 3-1, leading fans to believe he had done so intentionally in hope of costing Hodgson his job.

But speaking on the Diary of a CEO podcast, Carragher reflected on that game and insisted Gerrard did not miss on purpose.

As he went on, though, Carragher explained that it was clear within the dressing room that the manager had lost the backing of the squad.

The 44-year-old, who maintains he and Steven Gerrard were playing for the club, rather than any manager, detailed a meeting he had with Hodgson in which he tried to “help the situation.”

Supporters were rightly out of patience with the veteran coach, in particular his negative tactics and the continued use of players, such as Paul Konchesky and Milan Jovanovic, who were clearly not up to standard.

“I always remember, the only time I ever did this in my whole career,” Carragher recalled.

“We lost at home to Blackpool under Roy Hodgson, and I think it was an international break, I’d stopped playing for England then and I just couldn’t sleep.

“I went in the next morning and I went straight into his office.

“He was actually having a coaches’ meeting, and I was 33, 34, so a really experienced pro, and we just had this big discussion with all the coaches.

“He was talking about what he wanted to do for the next game and I said ‘you can’t do that’.

“It wasn’t me questioning him as a manager, it was almost like I wanted to help him.

“It was almost like, if you come out and say that or you play this player, you can’t do that anymore, that’s got to stop.

“I wouldn’t name the names I was talking about, I wouldn’t do that.

“It was more trying to help the situation, and try to help him as a manager because I knew it was tough.

“He hadn’t lost me as such, no manager could ‘lose’ me or ‘get’ me, I wasn’t really playing for them.