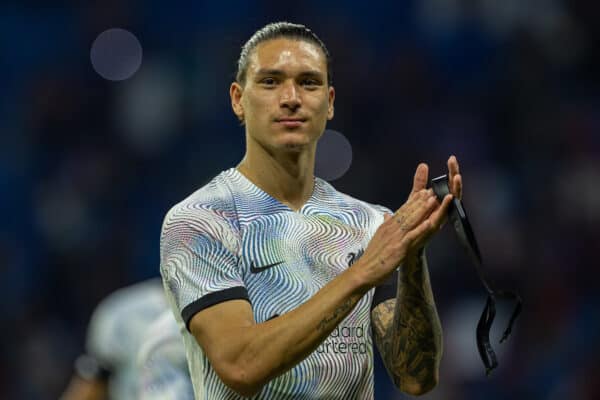 Darwin Nunez scored twice off the bench as Liverpool beat AC Milan 4-1 in their final friendly in Dubai, with hopes to start him against Man City.

The Reds are back in competitive action next week with two games in five days, as they take on Man City in the Carabao Cup and Aston Villa in the Premier League.

After nearly two weeks in Dubai, Klopp will be hoping his side are prepared for a renewed assault in the second half of the season, having broken for the World Cup.

Nunez was the first of Liverpool’s seven players to be knocked out of the tournament, and Uruguay’s early exit allowed him to rejoin his team-mates for training on Monday.

He then came off the bench to score twice in a 4-1 victory over Milan on Friday, picking up where he left off before heading to Qatar.

While there are doubts over Virgil van Dijk‘s involvement in the fourth-round tie at Man City on Thursday night, speaking before the friendly win, Klopp explained the plan to reintegrate Nunez.

“To be honest, he looks incredibly sharp and good, and really calm on the ball,” he told LFCTV.

“He’s had good sessions since he’s been here, but we don’t want to force it now.

“Could he have started? Maybe, yes. But it’s much more important that he can start next week.

“That’s why we bring him on from the bench, and he’s looked really good.”

It is likely that, after a week-and-a-half off and 31 minutes under his belt in Dubai, Nunez will be considered as a starter in midweek.

There does, of course, remain the chance that Klopp fields a rotated side in the Carabao Cup, with key names instead taking places on the bench, as he prioritises the Premier League.

The likes of Stefan Bajcetic and Bobby Clark could be in contention, but given the unique nature of this year’s festive fixtures, it seems more likely that the strongest possible side will line up at the Etihad.

“This group worked now together for nearly two weeks and we made a real step and that’s cool,” Klopp told LFCTV after the game.

“I don’t know in this moment. I hope we all get through.

“I know in Europe there’s kind of a virus going around, so I hope we can stay out of that and then we will make the decision obviously on Wednesday [for] who can play on Thursday.

“It will be a very interesting game after that period, but I’m looking forward to it.”