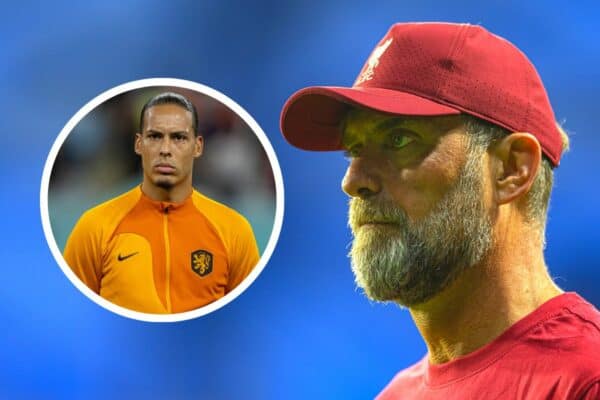 Speaking after Liverpool’s 4-1 win over AC Milan in Dubai on Friday, Jurgen Klopp suggested Virgil van Dijk will not feature in next week’s Carabao Cup clash with Man City, but Jordan Henderson and Trent Alexander-Arnold could be involved.

The Reds rounded off their mid-season camp in Dubai with an emphatic win over the Serie A champions, with goals from Mohamed Salah and Thiago in the first half, followed by a second half brace from Darwin Nunez.

Nunez rejoined the squad at the start of the week, but there are still five other players yet to reconvene ahead of Liverpool’s return to competitive action.

Van Dijk, Henderson, Alexander-Arnold, Alisson and Fabinho are all expected to return to training on Merseyside next week, but Klopp has revealed Van Dijk and Henderson have both been training individually in Dubai.

When asked if any of them could feature against City, Klopp appeared to rule out the idea of Van Dijk featuring, with the Netherlands captain playing every minute for his country in Qatar.

“Yeah, there’s a chance, of course – they train already,” Klopp told LFCTV on whether any of the returnees could play against City.

“But this group worked now together for nearly two weeks and we made a real step and that’s cool.

“I don’t know in this moment. I hope we all get through it and we all know in England, and in Europe in general, there’s kind of a virus going around, so we hope we can stay out of that.

“Then we will make the decision obviously on Wednesday who can play on Thursday. But it’s good and will be a very interesting game after that period but I’m looking forward to it.”

Klopp has been satisfied with the progress made by the players who have spent the last 10 days in Dubai, and believes a lot of their good work was evident in the win over Milan.

When asked to single out what pleased him most about the victory, Klopp said:

“That’s difficult! A lot of things. It was a really good game. There was one situation which I didn’t like – that was when we conceded the goal because it was directly after a drinks break.

“With the system they played, we avoided pretty much or denied all the switches. In that moment, we didn’t deny the switch and then it was difficult and they could score.

“Then extra-time in the first half – three, four minutes – it was like we were waiting for the whistle but it was five minutes and they had too much possession there.

“Apart from that, we were super dominant. We played a really good game. I liked how our midfield was connected, I liked our build-up because they surprised us a little bit with the system – I’m not sure they played it very often but because of their problems what they have with injuries they changed.

“So building up with three, we needed to adapt a little bit. When we did that, pressing was really good as well.”