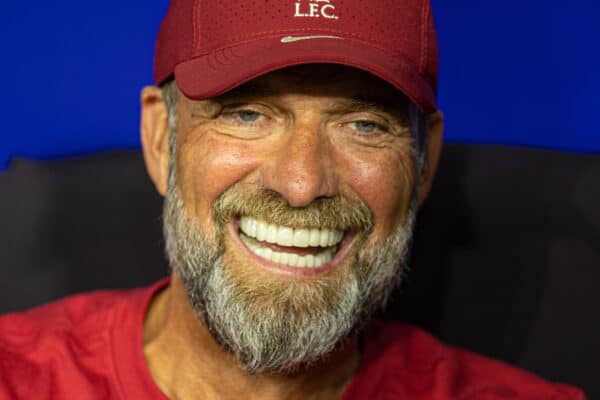 Liverpool’s warm-weather training camp in Dubai gave the opportunity for a group of youngsters to catch the eye, and four impressed against AC Milan.

Jurgen Klopp brought a 33-man squad to the United Arab Emirates for training sessions and friendlies against Lyon and Milan in the Dubai Super Cup.

Primarily, it served as a warmup to the second half of the season, which begins at Man City in the Carabao Cup on Thursday night, but it also gave a number of academy players a chance.

Nine featured over the two friendlies, with Klopp hailing the performances of Bobby Clark, Stefan Bajcetic, Melkamu Frauendorf and Ben Doak after the 4-1 win over Milan.

“Of course, when you bring on the kids [in the] second half and you see the pass from Bobby Clark,” he told LFCTV.

A brilliant ball from Bobby Clark, met by a cool @Darwinn99 finish ? pic.twitter.com/yI1Csna3Gc

“In these 10, 11 days, the kids especially, everybody made a real step forward.

“That’s why these things are so important, that we can involve them.

“And in general, tonight was the result of the last 10 days what we saw in training and tonight we could bring it on the pitch, which is obviously nice.”

The reality for some of those youngsters breaking through is that their long-term future may not lie at Liverpool, but as Klopp explained, it remains a vital process.

“It’s absolutely cool. I’m not sure the academy could watch the game tonight but when you see these boys and performing in a game like this, it’s cool,” he said.

“It’s a real physical game, adult football is a physical game and the boys need to make these steps [so] they can get ready for it step by step.

“How I said, the physical part will come but [when] you are not that strong, you can create a lot of ideas, you can do things a bit smarter.”

With the City game less than a week away, it would be no surprise now to see the likes of Bajcetic and Clark feature at the Etihad, having stepped up in Dubai.