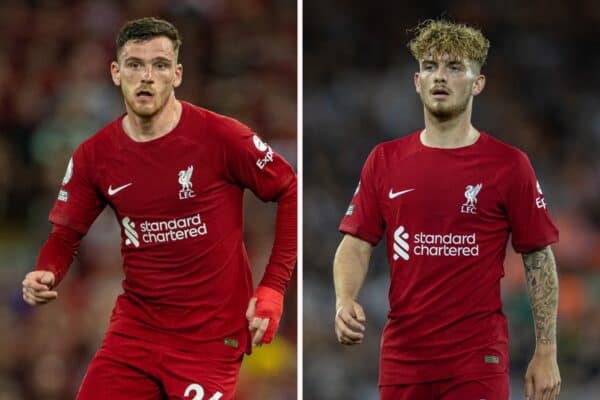 Robertson was one of a number of players who enjoyed a rare break thanks to the World Cup and played the full 90 minutes in Liverpool’s first two games back, but was withdrawn in the third.

Just after the hour mark, the Scot went to ground and called for the physio, with Kostas Tsimikas having already been stood on the touchline preparing to be introduced.

Robertson hobbled his way around the pitch, and with the next game in only three days’ time, his involvement could have been in question.

Elliott also limped off after his ankle took a beating throughout the match, and Klopp offered a brief word on the pair on Friday night.

Fortunately, it appears to be positive when it comes to their chances of featuring in the trip to Brentford on Monday.

“Funnily enough, Harvey, before the game, he injured Robbo a little bit,” the manager revealed.

“So in our warmup game he hit him with a knee in the hip, so that’s a dead leg.

“He could play but at one point the muscle closed and he couldn’t play on.

“And Harvey got a knock, which is quite painful, but when you saw the situation back it was clear that it’s quite painful. But that’s it I think.”

At this stage, though, both should be seen as doubts for Brentford, with James Milner, Roberto Firmino and Curtis Jones also on the absentee list along with Luis Diaz and Diogo Jota.

Fabinho, meanwhile, missed Friday’s win due to his wife going into labour, with it unclear yet whether he will be back on Monday.