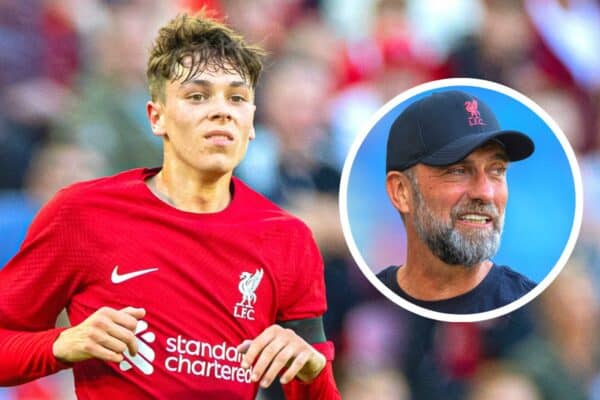 Speaking ahead of Liverpool’s friendly defeat to Lyon on Sunday, Jurgen Klopp name-dropped one youngster who is clearly impressing him in Dubai.

Thirteen academy players are part of the first-team group that have made the trip to the UAE for the club’s mid-season warm-weather training camp.

The majority of those featured against Lyon in Liverpool’s Dubai Super Cup opener, but before the match, Klopp revealed one young player who has clearly caught his eye.

Luke Chambers, who played the final 30 minutes at the Al-Maktoum Stadium is a player the Liverpool boss believes “has everything” for a centre-back, except the physical attributes required to perform at senior level.

“When I look at Luke Chambers I think ‘wow, he has everything for a centre half, apart from a body’,” Klopp told LFCTV before the game.

His comments on Chambers are especially interesting when you consider the 18-year-old has played the majority of his youth career at left-back.

Chambers, who won the under-19 European Championships with England last summer, is also accustomed to playing in a wing-back role, with several goals and assists to his name at academy level this season.

He has, however, been utilised at centre-back on several occasions during the current campaign, most notably in the UEFA Youth League.

Chambers was introduced at centre-back against Lyon on Sunday, a position Klopp appears to have identified as his strongest one for the time being.

That may be because of his ability on the ball, with the modern-day centre-back required to be more than comfortable when in possession.

It will be interesting to see whether centre-back now becomes the position Chambers is used in most often for the under-23s, given Klopp clearly views him as a prospect in that role.

Elsewhere, in his post-match press conference, Klopp welcomed the return to fitness of Joel Matip and Naby Keita.

Both players featured against Lyon and look set to be handed more minutes on the pitch in Friday’s friendly with AC Milan.

“Very important, absolutely very important. Yeah, so far he did pretty much everything in training,” Klopp added when asked about the importance of Matip’s return.

“There was one session where we got advice to rest him a little bit, but it was not from him, it was from the medical department, [so] that’s what we did. Apart from that he could do everything.

“Looked good today, 45 minutes was again what we were allowed to use him. That’s what we did. That’s good.

“Naby’s first 30 minutes, I think, for a while. Very helpful as well, important position, important player, so that was [what] we should only use him [for], 30 minutes.

“I think against AC Milan next Friday they are probably able to play a bit longer.”