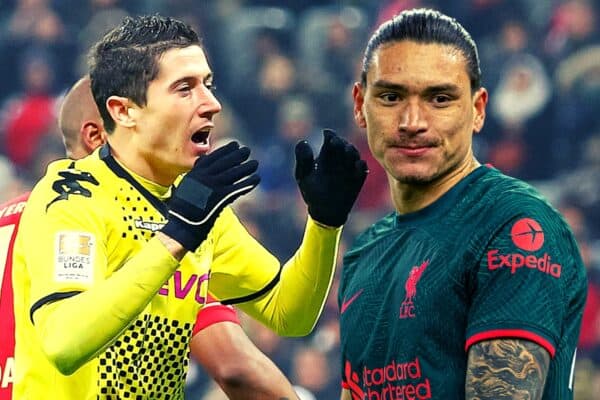 It may be hard to believe, but there was a stage when Robert Lewandowski struggled so much to score that Jurgen Klopp made bets on his finishing.

“My pocket was full of money!”

This story came after one journalist compared Klopp’s defence of Darwin Nunez, who missed a raft of clear-cut chances against both Man City and Aston Villa in the past week, with the plight of a young Lewandowski.

Before the Pole hit world-beating form for Dortmund and Bayern Munich, he was second fiddle to Lucas Barrios, who averaged just over a goal every four games across a career in South America, Mexico, Germany, China, Russia and France.

“If we could now just rewind, going back to that time, I was sitting in press conferences and journalists, really, when I started playing Lewandowski they asked me ‘why isn’t Barrios playing?’,” Klopp began.

“It was a constant conversation.

“Lucas Barrios had scored 16 goals that season and was the No. 9 in our team, so Lewy started playing a little bit in different positions to adapt to different things.

“He didn’t like it too much, Polish journalists were not too friendly with me because he didn’t play No. 9, he played in 4-2-3-1 as a No. 10 – I thought at the time it made absolute sense to develop his game.

“So there are a lot of similarities, to be honest.”

It is far from a crisis for Nunez, but Klopp accepts that there are aspects of the game that a player he believes is an “exceptional talent” – and who was named Man of the Match in the win over Villa – can fine-tune.

That includes, as was the case with Lewandowski just over a decade ago, finding the back of the net.

“I think Lewy would tell the same story. We had shooting sessions where he didn’t finish off one,” Klopp continued.

“It’s all about staying calm. When you see the potential, stay calm.

“It’s difficult in the world we are living in. I don’t want to get personal now, but because of you [in the media], asking and making a big fuss of everything.

“Then of course, the supporters, social media, all these kinds of things. The more you can shut that off, the better it is.”

A bizarre take from ESPN’s Mark Ogden, in the wake of Cody Gakpo‘s £37 million move to Anfield this week, argued that the Dutchman’s arrival could ‘pile the pressure’ on Nunez.

That is, of course, ridiculous, with Gakpo instead designed to complement the blossoming talents of Liverpool’s No. 27; the Marco Reus, if you will, to Nunez’s Lewandowski.

“We all agree that the potential is so obvious,” Klopp added.

“Is everything right? No. I think it’s clear when you see the second chance [against Villa], the big chance in the second half, he can run a little bit of an angle then he has a free choice.

“It’s just about staying calm and I am super calm – and the team as well, by the way. The team is completely convinced and that’s really cool.

“So yep, let’s hope we all, him included, stay healthy, then everything will be fine.”