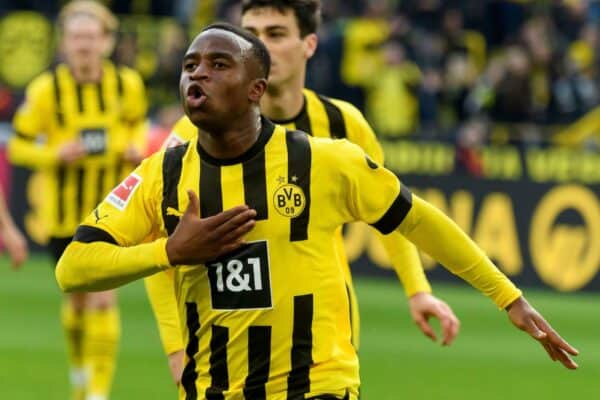 Liverpool have been credited with an interest in Dortmund striker Youssoufa Moukoko by a reliable source, with the 18-year-old’s contact set to expire.

Moukoko has long been regarded as one of the most exciting young players in Europe, having come through the Dortmund academy while playing four or even five years above his age group.

The Cameroon-born German striker became the Bundesliga’s youngest-ever player when he made his debut a day after his 16th birthday in 2020.

Just over a fortnight after, he broke the Champions League record, too.

Having only turned 18 in November, Moukoko is now a regular starter for Dortmund, and so far this season has scored six goals and laid on six assists in 22 games.

But there is a looming prospect that the teenager, who became Germany’s youngest-ever World Cup player at this year’s tournament, could soon depart the Westfalenstadion.

According to the Times, Liverpool are among the clubs monitoring the situation as his contract runs into its final months.

They are joined by Chelsea and Man United in their pursuit, though it is stressed that “interested clubs will have to convince [him] that he will not be signed to sit on the bench.”

“Moukoko values the opportunities he is getting at Dortmund, which might not be replicated elsewhere,” Tom Allnutt writes.

“He is wary of departing too soon and for a side where his role could be significantly reduced.”

Dortmund are unsurprisingly eager to tie their No. 18 down to a new long-term contract, with their previous offer of almost £85,000 a week shy of Moukoko’s demands of around £115,000 a week.

That could, obviously, be a red flag when it comes to any deal for the youngster, though he is clearly a prodigious talent who could be worth that outlay in time.

It is unclear whether Liverpool would be willing to offer that, or perhaps that Moukoko would accept a lower salary at a club of a higher standing than Dortmund.

But despite initial assumptions, there is a convincing case to argue that he would receive regular minutes if he were to opt for Anfield over Stamford Bridge or Old Trafford.

That may not be as a first-choice starter, with the likes of Darwin Nunez, Diogo Jota and, if he stays, Roberto Firmino ahead of him, but the exposure of Fabio Carvalho and Harvey Elliott, among others, shows chances would be afforded to him.

Of course, that Liverpool, Chelsea and Man United are all claimed to be interested, and the story is not via one of the Times‘ usual correspondents, suggests this could simply be agent talk.