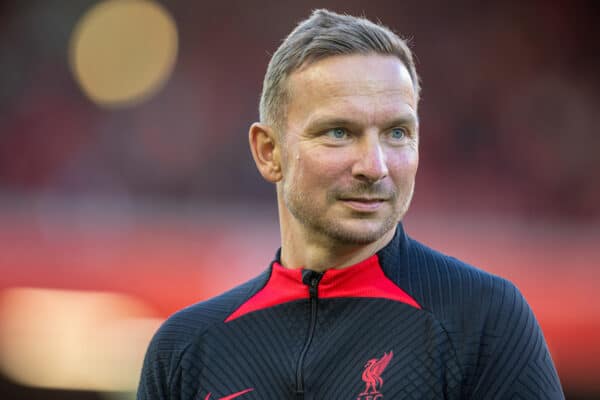 Liverpool must become “a pain” for other teams again – Pep Lijnders

With Liverpool ramping up their preparations for the second half of the season in Dubai, assistant manager Pep Lijnders says the Reds are focusing on becoming “a pain” for all of their opponents once more.

Ahead of Sunday’s friendly against Lyon, Jurgen Klopp said he had shown the players examples of their excellent pressing situations from last season, something he wants to see his team regain between now and the end of the campaign.

With fitness levels already of a good standard, the Liverpool coaching staff are using their time in Dubai to relay a lot of tactical information to the players.

The onus seems to be on helping the players improve their intensity off the ball, with Lijnders saying he wants to see the Reds become a difficult team to play against once again.

“We have to become a pain for all the other teams again,” he told The National while in Dubai.

Liverpool know they must find some consistency if they are to achieve anything in the Premier League this season, going into the break seven points behind fourth-placed Tottenham.

When quizzed on the team’s underwhelming start to the campaign, Lijnders suggested there was not a sole reason for their slump in form, and is hoping their “tough period” is now a thing of the past.

“If there was one simple reason or one simple conclusion – it’s never like this of course,” he continued.

“Many things came together that made the season more complicated and more difficult.

“If you come to a phase where there is a lot of doubt and players and team are not as dominant as you were before, you have to find different solutions. But it’s arrogant to think that life will always go up, up, and up, how it went the last years.

“And if we have that, success will come back again, if they work like that. Hopefully the tough period is behind us.