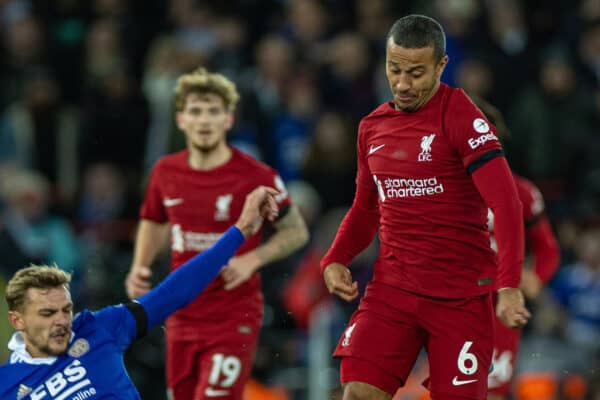 Liverpool scraped three points from Leicester thanks to two calamitous own goals and a second-half stalemate to somehow end the year with four consecutive league wins.

The 31-year-old was asked to be much more than an excellent passer and playmaker – the technical and creative ability for which he is primarily known. Not asked by his manager, necessarily, but by the performances of his fellow midfielders.

He needed to be dogged, clever, and positionally aware to cover areas that weren’t being covered by others.

Young Harvey Elliott struggled to get involved and when he did his play was fairly loose. A misplaced pass towards the end of the second half was eventually bailed out by Thiago‘s defensive work, summing the whole thing up.

You would expect better from Henderson in support of the young attacking midfielder, but he was the worst of the three. He failed to keep track of Kiernan Dewsbury-Hall for the goal, and indeed for much of the night.

Maybe it was a World Cup hangover. Maybe he was on the same diet as Kalvin Phillips. Either way, it wasn’t good.

Luckily for the English pair, Thiago was very good. Liverpool’s best player on the night and he needed to be to keep his side in this game and help claim three points.

Even by Liverpool’s poor defensive standards so far this season, the space allowed for Dewsbury-Hall for Leicester‘s goal was pretty shocking.

As he broke beyond the defence, breezing past Henderson as if he wasn’t there, you thought there must be another defender out of shot, but no one came.

Andy Robertson was criticised for stepping up, but he does his job as part of the offside trap and defensive line as Ayoze Perez made the run in behind.

The forward would have been offside had a pass been played, but there was no need for Dewsbury-Hall to make the pass as Henderson was poor positionally and then he failed to recover and make a tackle.

Liverpool had zero shots on target in the first half but somehow ended it with two goals.

This was all down to the misfortune of Leicester’s Belgian defender Wout Faes, who managed to put the ball in his own net twice in the most ridiculous fashion.

The first was an almost impossible deflection from a Trent-Alexander-Arnold cross, but it was one that goalkeeper Danny Ward had shouted for him to leave and he didn’t.

The second he turned in after Darwin Nunez’s dink over Danny Ward rebounded off the post into the Belgian’s path.

It was the first time an opposition defender had scored two own goals against Liverpool at Anfield, and they certainly gave Liverpool a get-out-of-jail-free card as they were very poor in that first 45 minutes.

Encouragement from the bench

Jurgen Klopp made his changes at the right time to keep his side in a game they were lucky to be in.

Regardless of how the goals came about, Liverpool had something to hold onto and they managed to do so thanks to a squad effort.

It’s safe to say Naby Keita hasn’t had the best of times since arriving at the club, mostly due to injury, but he was useful in this game after replacing the disappointing Alex Oxlade-Chamberlain.

Stefan Bajcetic continues to impress, and was arguably the second-best midfielder in the Liverpool team in this game after Thiago, despite only having a couple of moments in the action.

Kostas Tsmikas had one really encouraging driving run forward, continuing to show himself as an able deputy to Robertson, while Joe Gomez also showed composure when needed.

The upcoming schedule means all of these players, and possibly more from the January transfer market will be needed if Liverpool are to turn this season around and finish in the top four.

Days later they were playing Aston Villa in the league and this game against Leicester made it three games in just over a week. And it doesn’t stop there. It’s Brentford away on Monday.

Cody Gakpo won’t be available to play in that game unless the unlikely event that his paperwork goes through on a Bank Holiday, but he should be available for the FA Cup as Liverpool begin their defence of that particular title against Wolves at Anfield next Saturday.

On this showing though, Liverpool are going to need to be much improved in 2023.