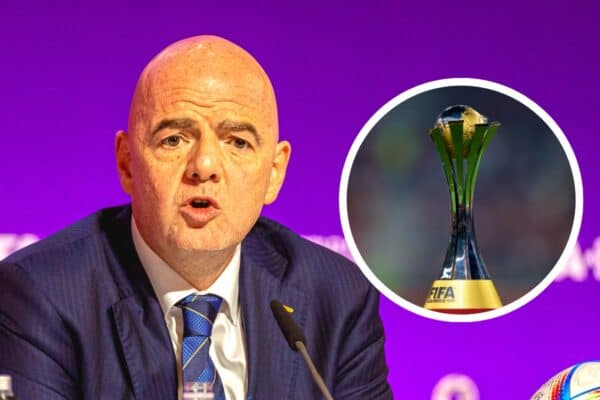 More games for Liverpool? Club World Cup to expand to 32 teams from 2025

You know what the football calendar needs? More games, said no one. Yet, FIFA president Gianni Infantino is to press ahead with an expanded Club World Cup competition from 2025.

Currently, the Club World Cup pits the winner of each confederation’s premier club competition, in addition to the host champions, against one another – a total of seven teams.

Liverpool won the competition for the first time in 2019 having earned their place thanks to their Champions League triumph in 2018/19, defeating Flamengo for the honour in the second of their two games.

The competition has been under scrutiny though having struggled to achieve consistent interest worldwide, with changes always in the reckoning.

China was to host a new tournament in 2021 but was postponed due to the pandemic, and now Infantino has told world football that FIFA are pushing ahead with their expansion plans.

In a press conference prior to Sunday’s World Cup final between France and Argentina, Infantino said, “As you will remember, we had agreed a few years ago to have a new men’s Club World Cup with 24 teams. This should have taken place in 2021 [but] was postponed because of Covid.

“The new men’s Club World Cup will therefore take place in 2025 and will feature 32 teams, the best teams in the world.

“Of course, the details of that still need to be discussed and agreed, but the 32-team tournament will go ahead, making it really like a World Cup.”

The concept would shift from an annual event to every four years but add further strain on players who have readily been voicing their objections to the lack of interest in player welfare.

“I think decisions get made – of course, we want to play as footballers, we want to get out there and play – but I am worried about player welfare and I don’t think anybody does take that seriously enough,” Jordan Henderson said back in 2021.

Jurgen Klopp has long been vocal on the issues of player well-being and no doubt will have plenty to say on this latest FIFA project.

Liverpool will almost certainly be one of the teams FIFA aim to have involved, adding needless games onto an already intense domestic schedule.