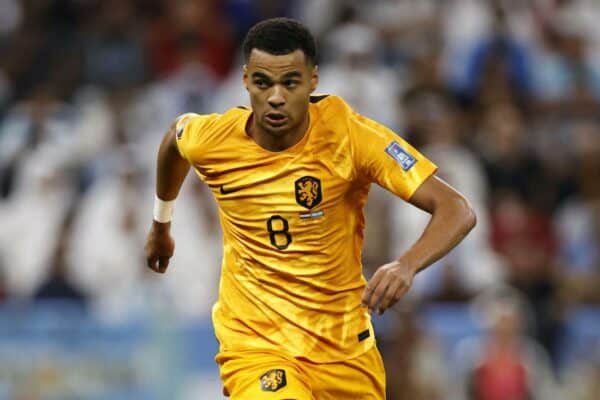 PSV Eindhoven have confirmed a deal with Liverpool for Netherlands winger Cody Gakpo.

Gakpo, who has 13 goals and 17 assists in 24 appearances for PSV this season, will arrive on Merseyside this week to complete his medical and sign for the Reds ahead of the January transfer window opening.

PSV director of football Marcel Brands announced the news on Monday evening, stating that it is “a record transfer for PSV.”

PSV and LFC have reached an agreement on the proposed transfer of Cody Gakpo.

The 23-year-old attacker will leave for England imminently where he will be subjected to the necessary formalities ahead of the completion of the transfer.

PSV add that they “completed the negotiations on Boxing Day” and “both clubs are not making any announcements about the transfer fee.”

Gakpo had been heavily linked with a move to Man United, with their manager Erik ten Hag keen to sign his compatriot.

However, Liverpool have moved to usurp their rivals after long-term injuries to Diogo Jota and Luis Diaz – with Diaz unlikely to feature prominently again this season.

Gakpo’s arrival has echoes of Diaz’s last January, with the in-form, right-footed, left-winger arriving after a stand-out first half of the season.

Gakpo will team up with his Netherlands captain Virgil van Dijk at Anfield, who said of him at the World Cup: “Hopefully Cody can go to the moon and back.

“What we see in training is what you see on the pitch. There is still so much potential and I hope he can carry on showing it for us. We are very happy with him.”

Who is Cody Gakpo?

Gakpo is a 23-year-old, right-footed winger who predominantly plays on the left of a front three.

He was already linked with a move away from PSV before a standout World Cup with the Netherlands.

Gakpo has an impressive 13 goals and 17 assists in 24 appearances for PSV this season.

The big question will be whether he can translate form in the Eredivisie into the Premier League.