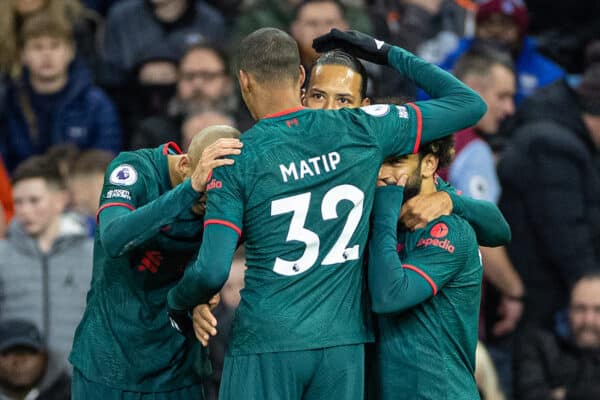 Liverpool resumed their Premier League campaign with a very welcome 3-1 win away at Aston Villa, closing the gap to the top four by two points in the process.

It could have come just two minutes in; instead it came after five.

Andy Robertson needed just one assist to overtake Leighton Baines and become the defender with the most assists in Premier League history and duly achieved the feat at Villa Park, albeit not with a typical one.

Whereas usually we might expect the Scot’s assists to be either set-pieces or wicked deliveries from the left flank, this was more Salah-esque: in off the right channel onto his left foot, a first-time, controlled touch across the six yard box – right into the feet of Mo himself.

Meanwhile, that Salah tap-in makes it 172 goals for the Reds – the same now as Kenny Dalglish, and the joint-seventh highest in Liverpool history.

In terms of who played and being our first (meaningful) fixture back after a six-week break, there were a few out there who bore watching more than most.

Firstly, Trent Alexander-Arnold. The right-back is such a key player for the Reds, yet cannot even be described as a bit-part player for England. As such, he didn’t have a break of any kind and was constantly training, but game time was minimal.

Would that make him rusty, or energised? Lacking rhythm, or despondent? We didn’t need too many concerns as it turned out – he was pinging passes around immediately, played a huge part in the first goal with an outside-of-the-boot clip and was generally in the mood in terms of the attack.

Similarly, Fabinho only started once for Brazil; given his dismal pre-World Cup form, his own game was another interesting one.

He was definitely better defensively here than he had been for most of August to November, though there’s still another gear for him to go through in terms of physicality. A positive step forward for sure though.

On the left of the attack, Alex Oxlade-Chamberlain got the nod and was rather different to the others in that he’s hardly played at all; that was evident from a less than perfect touch at times, though he had endeavour and willingness aplenty.

An hour was a fair run-out from him, though we’ll need more from him on the ball if he’s to continue there for now.

Darwin Nunez is a rare breed of player who can look Ballon d’Or capable and bench-worthy in the same game, sometimes in the same phase of play.

He makes so much happen, makes such clever runs and is near-impossible for defenders to contain, yet sometimes it seems the best way to stop him scoring is to simply have to make the decision himself over what to do.

Inside two minutes he had the big chance for that would-be Robertson assist, but opted to dummy the ball at the near post instead of clipping home.

Soon after he miskicked from close range, then within the space of three minutes had two massive one-on-one changes: first he smacked a volley straight at the ‘keeper after sprinting through to a bouncing ball, then when cutting in off the right channel opted to square to Robbo instead of shooting.

He was also in for a chance right before half time, but from six yards out hit it right at goalkeeper again.

The second half was a much quieter affair for the bewildering bulldozer, though he again gave a sighter of that mix of talents as he burst through from the halfway line, outpaced Ezri Konsa…and steered a one-on-one wide of the post.

Enough moments and madness for an entire front line in another team, but all Darwin’s own work here – and he still wasn’t done.

Not on the scoresheet this time, Nunez created the killer third by showing great pace and willingness yet again, keeping the ball in play and forcing yet more chaos in the Villa defence – Bajcetic eventually netting.

He is non-stop, non-conformist, non-conventional and none-too-easy to assess every match.

Enormous talent and a master of madness; add a little more composure to the last action and he’ll be a forward who contributes to two goals a game for the Reds.

A team of two halves

The three points are more than welcome but Liverpool remain a work in progress when it comes to salvaging the campaign, make no mistake of that.

It’s fair to say that the Reds are a bit of two teams right now: very good going forward and decent enough to trouble any team, but still wide open defensively and yet to rediscover the relentless consistency off the ball which was, for years, a hallmark of the side.

Either side of Fabinho remains wide open, too often.

Behind and inside of the full-backs remains an area teams target and have great joy with, both in direct balls from deep and quick exchanges from within the final third.

Because of this, it’s also fair to note Matip and Van Dijk stood up with excellent second-half showings, repelling a barrage of pressure for half an hour.

It’s not so much first half and second half which the Reds show themselves as a Jekyll and Hyde side with, but offensive and defensive, in possession and off the ball.

There are the areas Klopp and co must still keep working on, if we’re to return to peak, elite Liverpool FC.

One round of matches fewer at this time of year than usual, but even so the games will come around quickly for the Reds.

One down and three points claimed – but it’s straight onto Leicester and then Brentford as we close out 2022 and start 2023.

The gap to the top four right now is five points. It doesn’t sound great, but we still have a game in hand on Spurs – and we closed it by two points today, first time of asking.

With the Foxes dismal against Newcastle, the onus is on us to ensure we do not slip up any further, especially at Anfield where we’ve won only five of eight so far this term.

Plenty of reasons for post-Christmas positivity, all things considered, and a carefully optimistic look on to Friday night on Merseyside.