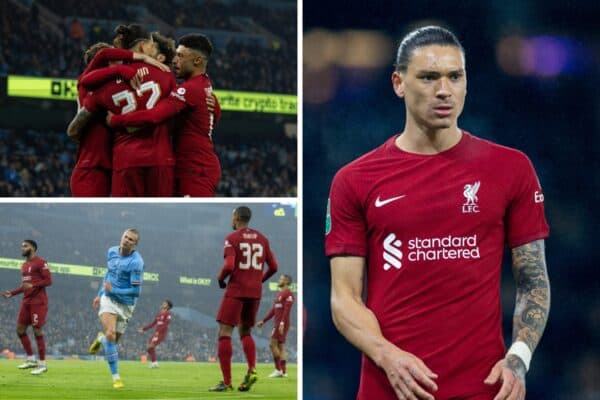 Reds are back, but what about Darwin & the defence? – Last word on Man City 3-2 Liverpool

We’re back in the swing of things and while Liverpool did not get the win on their return, they did not leave us short on discussion points after the 3-2 loss at Man City.

It was a game that laid bare the struggles that Liverpool do still have, namely in defence, but was also one that still offered up a number of positives for Jurgen Klopp.

Fabio Carvalho and Mohamed Salah were both on the scoresheet in the high-tempo affair, but it was not enough to continue the defence of the Carabao Cup title.

Here, This Is Anfield’s Joanna Durkan (@JoannaDurkan_) is joined by TaintlessRed (@TaintlessRed) to discuss Liverpool’s comeback, Darwin Nunez and how much disappointment there is over the cup exit.

First off, Liverpool are finally back. How does it feel?

JOANNA: It’s a great feeling, in some ways the break felt longer than it actually was.

We started in typical Liverpool fashion with injuries for Bobby and Milner and our defence still needing plenty of work, but I’m ready for the run of games we have ahead of us now.

Let’s just hope some luck heads our way, especially in the injury department as it seems we still need it!

RED: Echoing you Joanna, it does feel good to have Liverpool back.

The World Cup was high on drama and upsets in a number of games but the quality in a Liverpool vs. Man City match is much higher, even if there were many missing players and they’re not all fully match sharp yet.

Although the result and aspects of the performance weren’t what we wanted, it was good to see our players really tested which is exactly what they needed going into the serious business of the Premier League and building up to the Champions League.

The team defence was the downfall, not much has changed there then?

RED: Defensively Liverpool were way too open and made too many mistakes, many of which weren’t actually punished.

It wasn’t only the defenders’ fault, even though Gomez had yet another game to forget, and Robertson was also not close to the best version of himself.

As Klopp alluded to post-match, we had difficulty in midfield and Man City cut through us like a knife through warm butter. The tempo, physicality and precision of City caused youngsters like Carvalho, Elliott and Bajcetic a lot of issues.

Hopefully, the youngsters will take the learnings from this match and use them to get better.

The performance perhaps did further highlight the need to make signings in January, and not only in the summer if we want to get back into the top four.

JOANNA: I don’t want to see that third City goal again, and it’s not just in isolation as that’s a consistent way for the opposition to score against us – we love leaving men free at the back post.

As you said Red, there were too many mistakes and City just waltzed through with very little resistance far too often – I know, it’s the first game back and there were some young players involved.

“Obviously still a lot of space for improvement,” were Klopp’s words post-match, and he’d be right there, we need to be proactive not reactive.

Liverpool need to get back to being a more stubborn and physical unit (Fabio needs work there), not one that always needs to outscore the opponent to win.

Darwin is making all the right moves, but a word on his finishing…

RED: Darwin’s physical traits, desire, hard running and movement lead to him being a chance magnet. When he plays things always happen and he always seems to get chances.

He’s clearly not consistent with his finishing and in that sense reminds me a lot of a young Edinson Cavani, who had a lot of similar traits but also got criticised a lot for his finishing when he was young.

Nunez still managed to get an excellent unselfish assist where he ran onto a brilliant pass by Oxlade-Chamberlain and it almost surprised Salah that he passed rather than shot, but of course, he needed to take at least one of his own chances.

I’m still a big fan of Darwin, his goals and assists ratio per 90 since joining Liverpool is already excellent and I expect that as he matures and trains more his finishing becomes better as did Cavani’s.

I’d much rather he was playing than not, but there’s no denying he’s still raw.

JOANNA: Agree with you there, it’s good to have him out there and at least carving out the opportunities – and you feel his finishing will get there, hopefully soon.

He’s frustrating and brilliant in equal measure. It’s a shame most of his chances fell on his right foot but that does not excuse some of the finishing we saw.

Darwin could’ve easily ended the night with the match ball but Klopp will have no trouble looking beyond the misses and focusing on the creation of chances, it’s better he’s in the middle of the action than not at all.

Raw is a word I’d also use for him, you do forget he is still only 23.

Are you at all disappointed at exiting the cup at this stage?

JOANNA: It’s one of those ones where if you win, great and if not, it’s far from a bitter blow – it makes the taste of defeat more palatable, slightly, I guess.

For me, it’s better to have it off our plate now if we’re not going to win it, other competitions need more of our focus.

It’s unlikely that the schedule will let up as we’ve now opened up a couple of slots for our postponed league games, but that’s where our focus has to be.

We need to get back on track in the Premier League, build momentum and be in form for Real Madrid in the Champions League in February. But first, I’m hoping for a belate Christmas present at Villa.

RED: I don’t like us losing against any team, but the Carabao Cup was the least important of our competitions, and given how strong a side Man City put out, it’s always a possibility to lose a game away at the Etihad.

This season was already incredibly compacted due to the World Cup and Liverpool already have to find space to somehow squeeze in two extra league games that have to be rearranged after the Queen’s funeral.

Furthermore, the monetary gain from the Carabao cup is trivial compared to other competitions (winners get just £100,000).

It’s more disappointing for young players who tend to get more opportunities in this competition but overall I’m quite sanguine about the defeat. On to Aston Villa!