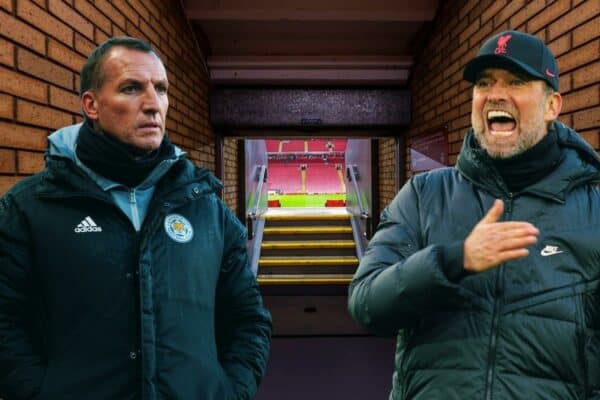 Reds return to Anfield – 10 things to know ahead of Liverpool vs. Leicester

Liverpool finally return to Anfield, with former manager Brendan Rodgers bringing his injury-hit and struggling Leicester side to Merseyside.

It will be 48 days since Liverpool played at Anfield, the 3-1 win against Southampton that preceded the World Cup.

A lot has changed since then in terms of the Anfield Road Stand development, fans will certainly notice the full scale of the stand.

Plans to remove the existing roof of the Anfield Road Stand during the World Cup were postponed, though, and that will now take place immediately after the final home game in May.

Both sides have been injury-hit this season.

Liverpool are without left-sided players Luis Diaz and Diogo Jota for the foreseeable, while Leicester are without key player James Maddison for this one.

After a 3-0 defeat to Newcastle on Boxing Day, Rodgers cancelled their day off on Tuesday.

Remarkably, Rodgers’ record against Liverpool is quite good. In nine games as an opposition manager, he’s lost four, won three and drawn two.

One of those defeats was in this fixture last season, a 2-0 win for Klopp’s side, which took place shortly after a miserable performance in a 1-0 loss at the King Power Stadium.

His two games as Swansea’s manager against Liverpool resulted in a draw and a win for the Welsh side.

4. This one usually goes one way…

Anfield is not a happy hunting ground for Leicester.

The Foxes haven’t picked up a point at Anfield since January 2019 in a 1-1 draw, and their last win here was back in May 2000 Martin O’Neill’s side beat Gerard Houllier’s.

Since Klopp took over, the aggregate score is 15-4 to Liverpool in seven league fixtures, plus the dramatic League Cup fifth-round penalty shootout win last season.

Much depends on Roberto Firmino‘s fitness as to whether there are any changes from the team that started at Villa on Boxing Day.

The Brazilian has said he is unavailable, but Klopp didn’t confirm that in his press conference, only that there were no new injuries and that Ibrahima Konate is back available.

We assume, then, that Firmino remains out.

That means the big question is whether Oxlade-Chamberlain keeps his place or Fabio Carvalho replaces him.

The Reds don’t play again until Monday – at Brentford – so there’s not too much need to rotate either.

With Maddison out, Leicester are missing their talisman.

Rodgers could bring in Jamie Vardy, a player Klopp has often been effusive in his praise of and who has scored a hugely impressive 10 goals in 15 appearances against Liverpool.

Harvey Barnes could be a threat out wide, while Ayoze Perez could replace the injured Praet.

Much of Jurgen’s pre-match press conference focused on the signing of Cody Gakpo, but there was also talk about Leicester.

“They had great results before the break, obviously,” said Klopp.

“We watched that game (Leicester 0-3 Newcastle), obviously I saw it but I can’t 100% know or explain why things happened.

“Of course James Maddison is a big miss, that’s clear, but apart from that they had a really strong side. But Newcastle is just a really good team, that’s obvious as well.

“I expect a tough game and I expect a reaction (from Leicester). I will expect a change of system during the game. They played with five at the back, they’ve played 4-2-3-1, they’ve now changed to a diamond – which looked more stable at that moment. Will Brendan decide to do that again? I don’t know.”

New signing Cody Gakpo isn’t eligible for this one yet, with the transfer window opening on Sunday.

But you can expect the Dutchman to be at Anfield watching his new teammates.

“I heard a lot of great stories about the stadium, about the atmosphere,” he said upon signing. “I cannot wait.”

Let’s hope he has an instant impact as Luis Diaz did a year ago!

9. Pawson for the first time this season

Craig Pawson’s the referee for this one. He actually hasn’t reffed a Reds’ league game yet this season – his last one in charge was the Community Shield.

This game is one of two Premier League matches on Friday night, but the only one live on TV in the UK.

If you’re not able to watch, or want our usual biased commentary to keep you company, the This Is Anfield match blog will be live from 7.15pm.