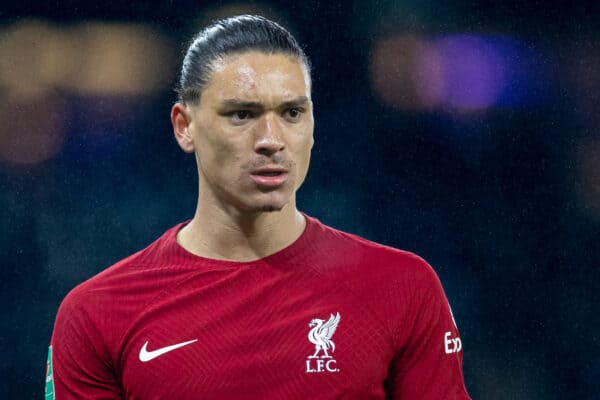 Nunez vs. Amartey could be “chaos” – The view from injury ravaged Leicester

Liverpool will be looking for a fourth consecutive Premier League win when they host Leicester on Friday, but Brendan Rodgers massively needs a result for himself.

The Reds secured an invaluable 3-1 victory at Aston Villa on Boxing day, as a much-needed return to form continued.

Meanwhile, Leicester were humbled by high-flying Newcastle at the King Power Stadium, losing 3-0 and barely laying a glove on their opponents.

On Friday night, the Reds and the Foxes do battle at Anfield, in what has to be considered a must-win game for the hosts.

Ahead of the game, we spoke with Leicester fan Jamie Thorpe (@thorpie54) to get the latest on the Foxes, Rodgers, Liverpool and more.

How would you assess Leicester’s start to the season?

Poor, whichever way you look at it.

We had a disastrous transfer window, losing Wesley Fofana late on and only signing one outfield player (Wout Faes), when we needed three signings at a minimum to give the squad the refresh it so desperately needs.

The disruption of the Fofana transfer saga cannot be understated, but even with that distraction, Leicester’s start to the season was just absolutely horrific, with a catalogue of basic errors, dreadful performances, set-piece calamities and strange managerial decisions combining to give us the worst start to any season in recent memory.

Fortunately, thanks in no small part to the form of James Maddison and the arrival of set-piece coach Lars Knudsen amongst other things, we recovered somewhat, going on a run of seven unbeaten and picking up some vital wins to reach the dizzying heights of 13th.

Despite this run, this is far beneath pre-season expectations, and serious questions have (rightly) been asked of Brendan Rodgers and his players.

Which Foxes players have shone or been particularly poor?

Maddison’s form for the past 18 months has been exemplary and this season he found another gear altogether.

When on form, he is nigh on unplayable and is the sort of player that can influence a game at any time.

Leicester’s entire system is geared around getting him on the ball in the areas in which he can cause most damage and it is no surprise to see him finally getting the recognition he deserves.

Harvey Barnes has shown flashes of his undoubted ability but remains too much of a confidence player for the time being, and Faes has injected some much-needed aggression into a side often criticised for being too nice.

At the other end of the scale, Danny Ward would not have imagined that when he finally became the undisputed number one at the club after so long as the deputy, that he would endure such a torrid time of it.

It is a testament to his character that he managed to recover and deliver some terrific performances, but it remains to be seen which Ward is the real one.

Daniel Amartey continues to flit from the sublime to the ridiculous seemingly at will, with fans never knowing if we are going to get an 8/10 or a 4/10 performance from game to game.

What have you made of Liverpool’s season so far?

Another mixed bag of a season, but your trajectory seems to be going in a definite upward direction.

Shock results such as losing to Nottingham Forest haven’t helped, but there is still little doubt about the quality that exists in the side.

Thiago was an obvious miss and that lack of coverage in the midfield area needs addressing, and this season was the first time I have seen Virgil van Dijk look anything other than indefatigable.

But when on song, Liverpool have the ability to put any side to the sword and certainly have it in them to reel in the sides above them.

Where will both sides finish this season?

Leicester’s season hinges almost entirely upon the January transfer window – one which we are traditionally quiet within – but it is clear that we need a centre-back, full-back (following James Justin’s latest injury) and winger to provide competition and depth.

If we pull this off, I see no reason we can’t recover and finish top half, but in all honesty, I would happily settle for 14th at this stage.

Liverpool have probably given themselves too much to do in order to catch Arsenal – 15 points is massive – even for them.

I don’t see Newcastle carrying this on all season sadly, so I would say Liverpool can snatch fourth.

Which Liverpool player would you most like to see at Leicester?

Mo Salah feels obvious given his ability but I would say Van Dijk at the moment – we desperately need some defensive solidity so why not have the most solid defender in the world?

On a personal level, I love watching Thiago play and I feel like him, Youri Tielemans and Maddison could make some seriously sexy stuff happen.

Where will the key battles take place on Friday?

Amartey vs. Darwin Nunez is an interesting one, given that both have a tendency for chaos.

If Leicester are to get anything from the game then Barnes will need to be on song, especially given that Maddison and Dennis Praet are both likely out the match.

His battle up against Trent Alexander-Arnold could be key, at both ends of the pitch.

It’s hard to see anything other than a Liverpool win given our injuries, with Jonny Evans, Justin and Maddison all key players.

We simply do not have the depth to replace them.

I will go with Liverpool 2-0 Leicester.