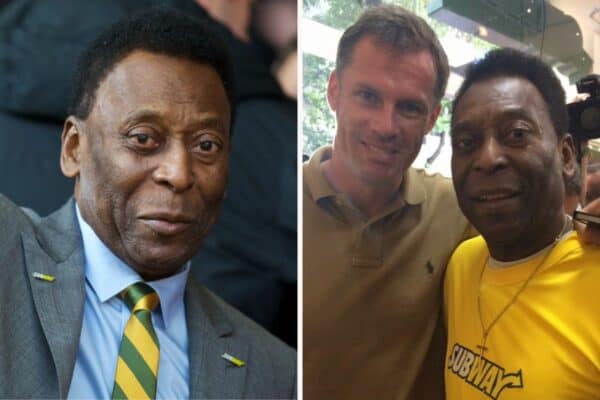 On Thursday evening it was announced that Pele had passed away at the age of 82, with a host of Liverpool players paying tribute to one of the greatest to have ever played the game.

The Brazilian had been suffering with kidney and prostate problems, undergoing surgery to remove a tumour from his colon in September of last year.

He was readmitted last month, with the hospital confirming Pele died “due to the failure of multiple organs, a result of the progression of colon cancer associated with his previous clinical condition” on Thursday.

A legend of the game, and a hero in his homeland, football’s leading figures have been paying their respects to Pele on social media, with three of Liverpool’s own Brazilian players posting messages of their own.

Elsewhere, Arthur posted an iconic image of Pele celebrating one of his three World Cup triumphs with the message: “Rest in peace, King. We will be eternally grateful for everything you did for us Brazilians. My condolences to the family and friends!”

Youngster Marcelo Pitaluga also posted a tribute of his own. “Rest in peace, King! The Greatest,” his message read.

Mohamed Salah was another to pay his respects, with his latest Instagram post reading “Farewell to a legend of football.”

When Salah was named PFA Players’ Player of the Year in April 2018, Pele congratulated him on his outstanding season.

“Congratulations on your award, @22mosalah,” he replied to Salah’s tweet at the time, in which he said he was “truly honoured” to have collected the prize.

“What a season. And more to come in the Champions League and World Cup. It’s been great to watch you.”

Jamie Carragher, Steven Gerrard and Sadio Mane were among the other ex-Liverpool players to mark their respects, while the likes of Ibrahima Konate, Thiago, Jordan Henderson, Luis Diaz and new signing Cody Gakpo also paid tribute on their Instagram stories.

It’s a very sad day for the football world when an icon like Pele passes away.
I’ll never forget the awe as a child of watching the VHS tape of Brazil 70, the greatest national team anyone has ever seen.
RIP to one of the Gods of the game #Pele ? pic.twitter.com/UWV4KV0hBN

Pele visited Anfield for Liverpool’s clash with Man United in 2015, where he was pictured meeting Philippe Coutinho and Lucas Leiva.

Jurgen Klopp has also expressed his admiration for Pele on plenty of occasions, admitting he was unusually nervous to meet him when they crossed paths at the 2006 World Cup.

“My father always told me, whatever people say in the future, Pele was the best,” he said at a Q&A event 2018.

“I’m not the type of guy who gets nervous but I was sweating like crazy in that moment.”