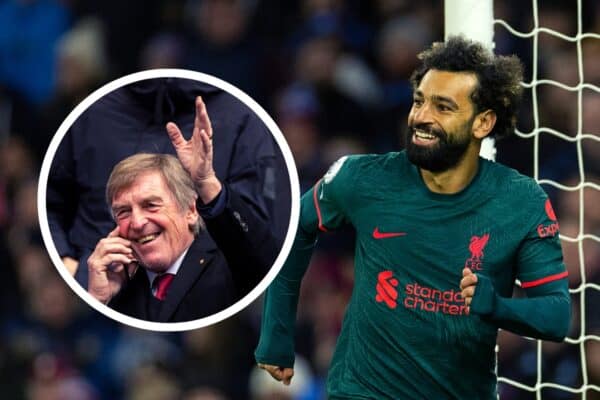 Sir Kenny Dalglish “delighted to hand baton” to Mo Salah after goal No. 172

Mohamed Salah‘s goal at Aston Villa saw him equal Sir Kenny Dalglish in Liverpool’s all-time goalscoring charts and the legendary No. 7 is “delighted to hand over the baton.”

As he so often has, Salah opened the scoring for Liverpool on Boxing Day and laid the foundations for a vital 3-1 win at Aston Villa, but the strike was significant for another reason.

It was goal No. 172 for Liverpool, a tally that saw him draw level with Dalglish in the No. 7 spot in the club’s goalscoring charts, an incredible feat just 277 games into his Reds career.

It took Dalglish 515 games to reach the same milestone and the 71-year-old was in the stands on Monday, with his grandson, and watched on as Salah moved one goal away from eclipsing his record.

And in a lovely message on Twitter after the match, he spoke of how he’s “delighted” to witness the Egyptian equal him, and soon rise above him, in the charts.

“A fantastic achievement for Mo Salah and great to be in the stands to watch the goal go in,” Dalglish penned on social media.

A fantastic achievement for @MoSalah and great to be in the stands to watch the goal go in. The first time I’ve taken my grandson to an away game – thank you for making it a memorable one! Delighted to hand over the baton and I hope it brings even more success! YNWA https://t.co/OzIyEZ4l0c

“The first time I’ve taken my grandson to an away game – thank you for making it a memorable one!

“Delighted to hand over the baton and I hope it brings even more success! YNWA.”

From one class act to another, Liverpool have certainly been blessed in this department.

Dalglish last added to his Reds goal tally in April 1987 and in that time has seen Steven Gerrard and Robbie Fowler surpass him in the all-time list, with Salah to follow imminently.

And Salah will swiftly be hunting down both Gerrard (186 goals) and Fowler (183), he could well find himself ending the season as Liverpool’s fifth-highest goalscorer in club history.