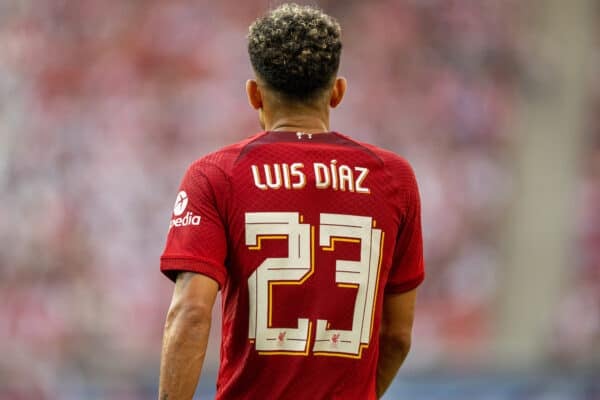 Reports in Colombia state that Luis Diaz is set to undergo surgery after a recurrence of his knee injury, with Liverpool not expecting him to play again until March.

And although that remains unconfirmed for now, with Jurgen Klopp merely stating the winger was set to undergo further tests on the injury, a timescale of those proportions would see him miss some key games for the Reds.

One of the blessings of this year’s mid-season break for the World Cup was that Diaz, who sustained the injury against Arsenal in October, would only miss a handful of matches.

Earlier this week, he was pictured back in training alongside his Liverpool team-mates on their warm-weather training camp in Dubai, and was initially expected to be ready to return to action later this month.

However, it then emerged on Friday that Diaz was leaving Dubai for treatment, after complaining of discomfort in his knee.

Competitive Liverpool matches up until March

* Matches depend on Liverpool’s progress in competition

So far, the club have remained coy on the extent of the problem, but Colombian journalist Pipe Sierra is the first to report the news of surgery and a likely timescale, writing that the issue is a lateral collateral ligament (LCL).

Sierra also states that Liverpool expect Diaz to return in March. Such a timeframe would mean he will have missed five months of the season by that stage.

Between now and March, the Reds are scheduled to play 12 matches, with that number due to increase depending on their progress in the Carabao Cup and FA Cup.

Diaz will miss the club’s competitive return to action against Man City on December 22, as well as their festive league fixtures against Aston Villa, Leicester and Brentford.

Later in January they begin their FA Cup campaign against Wolves, before league encounters with the likes of Chelsea, Everton and Newcastle before March.

The first leg of Liverpool’s Champions League meeting with Real Madrid will be played on February 21, but Diaz may have a chance of featuring in the return leg on March 15.

The FA Cup fourth and fifth rounds will also take place before early March, and it should also be noted that Liverpool are three victories away from another Carabao Cup final, which is set for Sunday, February 26, making Diaz a doubt to feature should the Reds get that far.

Diaz’s injury setback is a huge blow for the Reds, especially when you consider that Diogo Jota is not expected to feature again until at least February.