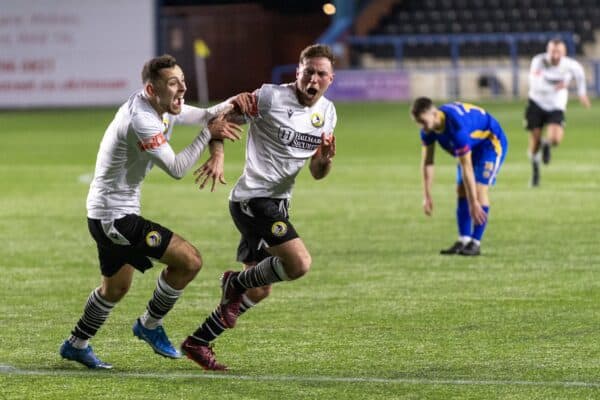 The non-league derby Liverpool fans should head to this weekend

France and Argentina will face off in the World Cup final on Sunday, but before that, there’s the more pressing issue of Halton’s bragging rights.

After almost every fixture was called off last weekend due to frozen pitches, there’s hope that a slight increase in temperatures will see non-league football return on Merseyside.

And with Liverpool not back in competitive action until Thursday night at Man City, it gives another opportunity to get out and support a local club.

Match of the weekend

We’re heading to the south end of the Liverpool City Region for this week’s featured match as Runcorn Linnets travel across the Mersey Gateway to face Widnes at the DCBL Stadium Halton.

The ground is primarily home to Widnes Vikings, who play in rugby league’s second tier, but previously played host to Liverpool and Everton‘s women’s teams.

Widnes FC have played there since 2012, and though the stadium has a capacity of 13,350, the football team’s record attendance is 522 – set in the same fixture last season, when the crowd were treated to an eight-goal thriller that finished 5-3 in favour of Runcorn.

Linnets narrowly missed out on promotion last season, losing at home to Marine in the play-off final despite being in front at half-time, but they’ve bounced back well and sit second in the table, six points behind Macclesfield having played one game fewer.

Meanwhile, Widnes are having a nightmare campaign and will be hoping the occasion of a local derby can lift them to a higher level as they need to start picking up points.

With just four wins from 18 games, Michael Ellison’s side lie level with Ramsbottom United at the foot of the table.

However, a 3-2 win against Glossop North End last time out, in which they twice came from behind, could be the catalyst they needed to kick on after Christmas.

Here’s a list of every game involving Merseyside teams in the non-league pyramid this weekend:

(All games kick off at Saturday 3pm unless stated)