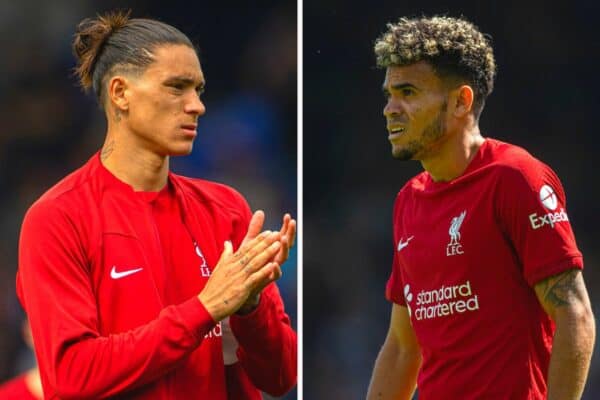 With more reports on Monday that Luis Diaz is now set to be sidelined until around March, Darwin Nunez may now have to get used to a role he may not have envisaged when he joined the club last summer.

According to The Athletic‘s James Pearce, Diaz is expected to be out for around three more months, after undergoing surgery to repair damage to his lateral collateral ligament.

That procedure is believed to have taken place over the weekend, with Jurgen Klopp describing Diaz’s setback as “a proper smash in the face.”

Pearce also adds that Diogo Jota, Liverpool’s other main left-sided attacking option, is still not expected to be available until “late January or perhaps February,” as he continues to recover from a serious hamstring problem.

So how does Klopp go about filling the void on the left of Liverpool’s front three? The answer going into the break for the World Cup was Darwin Nunez, but is it really a role he is suited to on a long-term basis?

When Diaz and Jota initially sustained their injuries in October, Klopp tinkered with a few ways to set up the team without them.

First, there was a switch to what Klopp and the players referred to as a 4-4-2. Then came the diamond formation, with the boss feeling the best way to utilise his three remaining available forwards would be with Roberto Firmino just behind Mohamed Salah and Nunez in more narrow positions.

However, Liverpool appeared to turn a corner, of sorts, in November’s 2-0 home win against Napoli, when Klopp decided to revert back to his usual 4-3-3 system. Nunez didn’t start that game, but an impressive cameo off the bench in a left wing position led to a start in that role in the following game away at Tottenham.

The Uruguayan produced another good performance there, before starting in the same position and scoring twice in Liverpool’s 3-1 win against Southampton, arguably his best game for the club yet.

When Nunez joined the club for what is eventually expected to be a club-record transfer fee in the summer, many envisaged him mainly being utilised at the heart of Liverpool’s attack, with Salah and Diaz either side.

But the Reds’ injury issues forced a rethink, and with Nunez proving he was capable of playing on the left for Benfica last season, it was no surprise when Klopp eventually decided to deploy him in a similar role.

It may not be viewed as his best position in the long-term, but with both Diaz and Jota still absent, Nunez may still be the most suitable option for that side.

That game against Southampton was the clearest sign yet that, after a tough start to his Liverpool career, Nunez was really coming into his own.

Some felt the break for the World Cup came at a bad time for Liverpool, given their upturn in form at the start of November.

One of the main benefits of the break was supposed to be the idea that Diaz’s injury would only see him miss a handful of matches, but his latest setback has quashed such a suggestion.

Nunez struggled to make an impact with Uruguay at the World Cup, but will be hoping to pick up where he left off with his club form prior to the tournament.

Against Southampton, he thrived in the left-sided role Diaz has vacated, with the average positions from the game showing how he and Salah were able to run in behind Southampton‘s back line, with Firmino dropping deep.

He may not have as much joy in this role against other, tougher opposition who are more compact in defence, but the two goals he scored and his overall performance was a great source of encouragement.

Nunez rejoined the Liverpool squad at the start of this week, and when the Reds travel to Man City for their first competitive match after the World Cup on December 22, don’t be surprised if it’s him on the left of Klopp’s front three once again.

Without Diaz and Jota, Liverpool are short options for the left wing, but there are still a few other solutions aside from Nunez.

One of the main ones is Fabio Carvalho, who scored and performed well when selected to start on that side against Lyon on Sunday.

Having played the majority of his football for Fulham in a No.10 role, Carvalho’s profile is a different one to Nunez’s, with the Uruguayan a more direct forward who is more instinctive in front of goal. There’s no doubt, however, that Carvalho is certainly an option for that position.

Curtis Jones is another, although the 21-year-old is currently working his way back from injury.

Alex Oxlade-Chamberlain is fully fit again and was one of the Reds’ more promising performers in the second half against Lyon.

Should he have any aspirations of earning a new contract, he’ll be keen to impress in the second half of the season, and proved last season that he is capable of doing a job in one of the wider attacking positions.

Nunez, though, certainly looks to be the most suitable option for the time being, and while the Reds may consider advancing any plans to sign a new forward in the January transfer window, the ex-Benfica attacker is now set for a big opportunity to make himself one of the first names on Klopp’s team sheet.