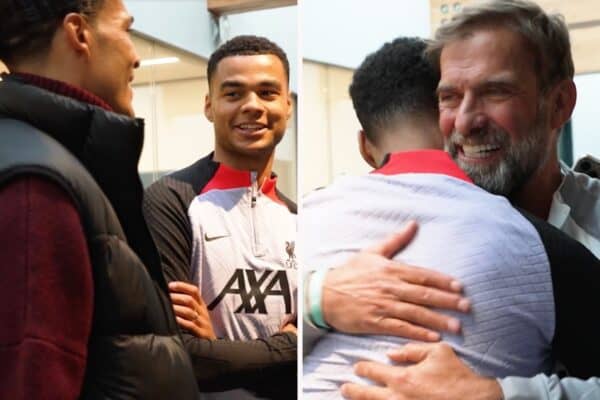 Jurgen Klopp has explained that “there is a lot to like about” Cody Gakpo, after making the £44 million Dutchman his latest signing at Liverpool.

The Reds moved quickly to land a deal with PSV Eindhoven for their academy product and often-captain Gakpo, who leaves for an initial £37 million.

It is a statement signing for the club, amid uncertainty over owners Fenway Sports Group, and comes at a time when Klopp is looking to revive his side’s fortunes.

With Luis Diaz and Diogo Jota out with long-term injuries, the manager may need Gakpo to hit the ground running, and speaking to the club’s official website, it is clear that Klopp has full faith in his No. 18.

“He is still only 23 years old but he already has a lot of experience.

“He was the captain of PSV, he was the player of the year in Holland last season and, as a lot of people have just seen, he also had a great World Cup with his national team.

“So, it is clear that he is already a really, really good player, but his age also means he also has the potential to become even better.

“Offensively, he is very versatile and, on top of this, we know he is a smart footballer and also a smart person, so we are really excited to be able to work with him.”

The swift agreement to bring Gakpo to Anfield is a testament to the commitment of not only FSG, but also sporting director Julian Ward at a time when they could ease off the gas.

Not only are FSG weighing up offers to sell the club, but Ward followed this up by tendering his resignation, as he and director of research Ian Graham prepare to depart in the summer.

But Ward worked through the festive period, with negotiations taking place on Christmas Eve and Christmas Day, to complete a “really impressive” transfer.

“It really is great news for us that we have been able to do it and I have to say it has been a fantastic job by everyone involved, especially Julian,” Klopp continued.

“The work that has gone into this has been really impressive.

“And in the end we have managed to sign a player who we have known about for quite some time and who we believe will have a really bright future with us.”