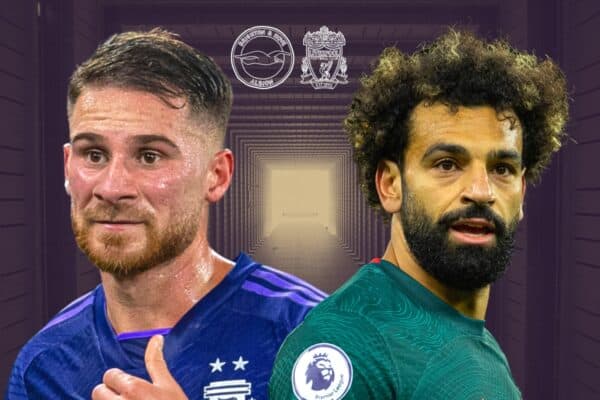 10 key things to know ahead of Brighton vs. Liverpool

Liverpool have never been on the end of a losing scoreline at the AMEX Stadium, but can they maintain that record against a free-scoring Brighton?

The new year hasn’t been particularly kind to Liverpool with a win yet to be secured in their two matches to date, but there’s a chance to change that at Brighton.

It’s not going to be easy, the Reds’ form suggests as much, but now is as good a time as any!

Here’s 10 key things you need to know ahead of kick-off on the south coast.

Liverpool have played eight away games in the Premier League this season and have just eight points to show for it, the 12th-worst record in the competition.

We don’t need to rehash what unfolded on the last road trip, it was not pretty and the same cannot unfold this time around.

Klopp’s side have scored 11 and conceded 13 goals away from Anfield, but they will be hopeful of taking advantage of Brighton‘s inconsistent home record.

The Seagulls have 11 points from eight home games, scoring 13 and conceding ten.

2. Brighton not short on goals

While Liverpool have become all too familiar with missing golden chances in front of goal and conceding far too many, Brighton are in a rich vein of form to take advantage.

Roberto De Zerbi’s side have found the sweet spot, scoring 25 goals in their last nine games across all competitions – that is an average of 2.8 goals per game.

They have scored two or more in each of their last four games, with Charlton the only team to keep them scoreless since October.

In comparison, Liverpool are averaging 1.8 goals scored per game over their last nine fixtures.

Roberto Firmino has not played a single minute since Liverpool returned from the World Cup break and that wait is only to be extended, Klopp confirmed.

What was expected to be a 10-14 day injury has now turned into we “don’t know exactly when he will be back,” a worrying update to say the least.

Darwin Nunez‘s involvement at Brighton is also questionable and all will depend on his ability to train on Friday, his issue is “not a major one” but he’s in doubt.

Stefan Bajcetic and James Milner are both fit and will be expected to be named in the matchday squad.

4. A look at a functional midfield?

Brighton are eighth in the Premier League, one point behind Liverpool in sixth and they are forging ahead with a 4-2-3-1 formation.

Their double pivot has Moises Caicedo, a name not unfamiliar to Reds thanks to transfer speculation, at the heart of it, in addition to Alexis Mac Allister – and recently, Pascal Gross.

They keep Brighton ticking and it’s thanks to savvy transfer business from the club, a model Liverpool could do worse than taking a page from.

Klopp was full of compliments too, saying, “Smart scouting, good decisions. Their connections to South America are obviously pretty good.”

With forwards in short supply for Liverpool, Cody Gakpo will be making his Premier League debut at Brighton – we’re not even going to consider a late fitness issue!

If Nunez is unavailable, Mohamed Salah and Alex Oxlade-Chamberlain are the likely candidates to line up alongside the Dutchman in attack.

As for the midfield, Fabinho and Thiago are almost certain starters, with the likes of Jordan Henderson, Naby Keita and Harvey Elliott vying for the final spot – or could Klopp even change formation?

As for Brighton, De Zerbi has ruled out Leandro Trossard due to his poor attitude and behaviour, while Mac Allister could force ex-Red Adam Lallana to start on the bench.

Klopp cut quite the prickly and frustrated figure on the eve of the match as transfers, or lack thereof, were again the focus – with one journalist ending up in the firing line:

“I have to tell you again the money story? What could be the reason we have the money like crazy but don’t buy the players even when they are available?

“We have a problem, in the moment, four of our offensive players are injured. If we buy another one, then they come back, and we have seven strikers, we couldn’t even put them all on the Champions League list.

“It’s just not that easy, you cannot sort the problems, especially injuries, in the transfer window.

“Injuries are a big shadow for all of us because you cannot sort it in the transfer window, sometimes you have to but usually we just have to get through until the boys get back.

“The transfer market, for us, in this moment, is not the solution.

“But if somebody tells me ‘yes, there it is’ then we will do it, but for this specific situation, I don’t think it will happen.”

It’s a traditional Saturday kickoff time for Liverpool this week, their fourth 3pm start this season and it’s a timeslot that they’ve dropped points in only once to date.

A 9-0 win over Bournemouth and a 2-1 victory against Southampton account for two of the three matches, with the 3-3 draw against Brighton back in October accounting for the blemish.

Notably, though, the abovementioned games have all been at Anfield.

Liverpool’s trip to Brighton is one of four Premier League games to start at 3pm this weekend.

8. Another record on the line

Mohamed Salah broke into Liverpool’s top seven goalscorers of all time against Wolves and this week he could rewrite yet another record.

If he scores against Brighton, which has done so six times previously – the joint-most of any Red – he will become Liverpool’s leading goalscorer away from home in the Premier League era.

The Egyptian currently has 55 goals, the same as Michael Owen, and can claim yet another record with goal No. 18 this season.

Here’s hoping he can do just that in a needed Liverpool win.

The referee for this one is Darren England, who last oversaw a Liverpool match in September 2021 for the trip to Norwich in the Carabao Cup.

England averages 20.5 fouls awarded per game in the Premier League and dishes out, on average, 3.13 yellow cards.

As for who is operating VAR, it is Neil Swarbrick – who retired from officiating in 2018.

With Liverpool’s trip to Brighton scheduled for a 3pm kickoff on Saturday, it will not be shown live in the UK.

This Is Anfield will, however, have a full worldwide TV and online stream guide for you ahead of kickoff.

Plus, our usual matchday live blog will be in full swing from 2.15pm (GMT), with Sam Millne at the helm to keep you updated and informed throughout the match.