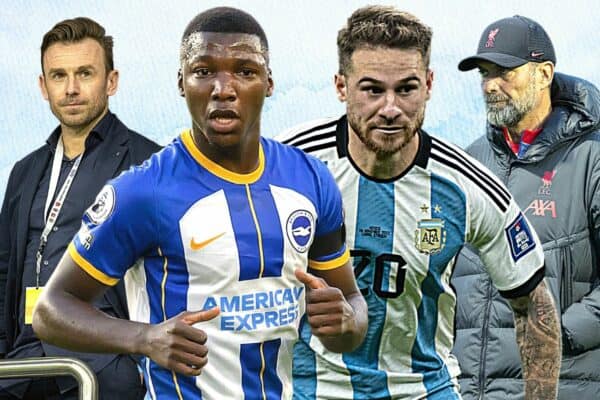 Despite a number of high-profile departures on and off the pitch in recent years, Brighton‘s excellent recruitment strategy means they are as competitive as they have ever been in the Premier League.

As Liverpool prepare to take on Roberto De Zerbi’s side at the Amex Stadium on Saturday, many may even have the home side down as favourites.

The table shows Brighton in eighth, one point behind the Reds in sixth, but with Liverpool continuing to ship goals for fun, a meeting with a Brighton side whose last two results were 4-1 and 5-1 victories is far from the ideal next fixture.

As has often been the case in recent years, a number of Brighton‘s star players are being linked with big-money moves to some of the Premier League‘s top clubs, including Liverpool, this month.

And at a time when Jurgen Klopp‘s team are crying out for an injection of quality in the transfer market, it’s certainly worth highlighting the impressive way in which the south coast club operate when it comes to recruitment.

Moises Caicedo. A player plenty of Liverpool fans would like to see arrive through the door at the AXA Training Centre this year.

The fee touted for the Ecuadorian’s signature is upwards of £60 million. That, for a player who was a relative unknown when Brighton spent £4.5m to sign him in February 2021.

There are plenty of other examples. Alexis Mac Allister, a £7m signing from Argentinos Juniors in 2019, has just won the World Cup, while the impressive Kaoru Mitoma cost them just £2.5m.

Leo Ostigard, a player who featured for Napoli against Liverpool earlier this season, joined the Serie A side from Brighton last summer.

Having signed for the Seagulls for around £100,000, he spent three seasons out on loan, before joining Luciano Spalletti’s side in a deal that could rise to £10m.

Not all of these signings are hits. There will always be an element of risk to acquiring so many raw talents, but the money made on those signings who go on to bigger things make those risks worth taking.

It’s interesting to note that Brighton wanted to make Darwin Nunez their club record signing for a fee of around £25m in the summer of 2021. A year later he joined Liverpool for more than three times that amount.

Brighton also have a ‘feeder club’ in second division Belgian outfit Union SG, while their impressive academy has produced the likes of Robert Sanchez and Jeremy Sarmiento, both of whom featured at the World Cup, as well as Evan Ferguson, the 18-year-old striker who has scored against Arsenal and Everton in recent weeks.

Brighton have been forced to undergo something of a revamp both on and off the pitch in the last year, but given their form this season, you certainly wouldn’t know it.

Last summer they lost technical director Dan Ashworth, who was integral to the development of their successful transfer strategy, to Newcastle.

Key midfielder Yves Bissouma left for Tottenham for around £35m, while Chelsea spent more than £60m to lure Marc Cucurella to Stamford Bridge.

Then, of course, Potter made the move to Chelsea, and was followed by a host of his backroom staff and, more recently, head of recruitment Paul Winstanley.

They have dealt with such changes admirably, with De Zerbi taking the team from strength to strength. Former Liverpool midfielder Adam Lallana has been a key cog in a team with a plethora of young talent.

The fact they had eight players at the World Cup, including winner Mac Allister, certainly won’t do any harm to their global appeal, either.

With the Reds on the look out for a new sporting director to replace the outgoing Julian Ward, you would expect there to be a general review of the way they conduct their transfer activity.

And if the Reds need something of a model to replicate, Brighton certainly wouldn’t be the worst example to follow.

Earlier this season, Klopp admitted he would like to have taken more “risks” in the transfer market. Perhaps he was alluding to the acquisition of more players who are not proven at the top level, something Brighton have mastered.

While Fenway Sports Group remain in charge of the club, and without the finances of many of their rivals, Liverpool certainly need to find a way to be savvy in the market.

Michael Edwards and Ward have been excellent, but their failure to address the long-standing need for new midfielders now, or new centre-backs in 2021, could surely have been handled more efficiently.

If reports are to be believed, Liverpool will need to shell out more than £100m to sign top transfer target Jude Bellingham this summer.

And while there is always going to be a need to splash the cash on ready-made players at times, there may be room for more streetwise transfers at Anfield.