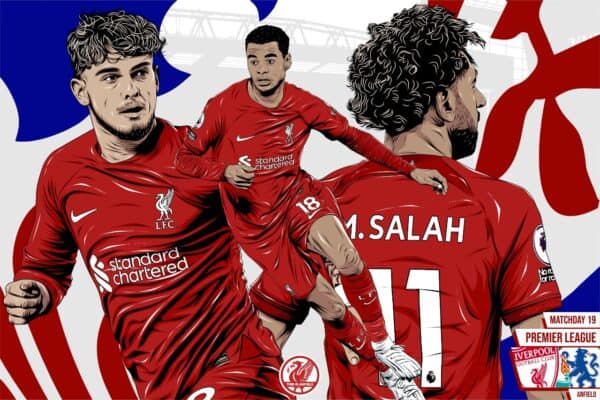 10 key things to know ahead of Liverpool vs. Chelsea

Chelsea are the visitors to Anfield on Saturday as Liverpool look to build on Tuesday’s promising performance in the FA Cup and avoid re-writing a 70-year-old record.

After Liverpool’s second string produced an improved performance on Tuesday, beating Wolves to reach the FA Cup fourth round, the Reds return to action at Anfield with Chelsea coming to town.

Having seen Liverpool consistently fail to perform, there will be an expectation that some of Liverpool’s youngsters are involved against the west London side.

Here are 10 things you need to know ahead of Liverpool vs. Chelsea or in Premier League table terms, 9th vs. 10th.

1. Forcing their way in

On Tuesday, Jurgen Klopp made eight changes to the side that lost at Brighton and fans will be hoping some of the players that came in stay in the team.

After a fantastic showing in holding midfield, Stefan Bajcetic will consider himself unlucky if he doesn’t start on Saturday.

The manager hinted at the possibility, saying, “it doesn’t look like we have to be careful” with the deployment of the 18-year-old.

Harvey Elliott who got the only goal at Molineux, also staked a claim to start.

He was close for Wolves but Klopp has confirmed that Darwin Nunez is available to play against Chelsea, giving a brief, but emphatic, “yes” over his return.

With Diogo Jota, Luis Diaz and Roberto Firmino still all out injured, the Uruguayan is likely to come straight back into the team.

Cody Gakpo played centrally against Brighton but didn’t offer the same threat in behind as Nunez does, and the Dutch international is better known for his work off the left wing.

3. Mudryk in the mix but no Felix

Joao Felix and Mykhailo Mudryk are two big names to have signed for the Blues this month, with the latter costing over £88 million including add-ons, taking their monthly spend to £190 million…so far.

Mudryk has been training this week and could start on Saturday after Potter said there was “a chance” he could make his debut.

Felix, however, won’t be available – the loanee from Atletico Madrid was sent off on his debut for a studs-up tackle on Fulham‘s Kenny Tete.

Saturday’s fixture will be Klopp’s 1,000th as a manager.

Across 23 seasons, he’s managed three clubs and has gone down a legend at both Mainz and Borussia Dortmund. He took the latter back to the top of European football, reaching the Champions League final and winning three major honours.

At Liverpool, he boasts the best win percentage (62%) of any manager in the club’s history and has won every trophy on offer except the Europa League.

We hope there are another 1,000 games, but just with the Reds of course!

5. Potter in need of some magic

Some have described Liverpool’s current predicament as a crisis but Chelsea are in an even deeper hole than Liverpool at the moment.

Since Graham Potter took over in September, there’s been turmoil behind the scenes at Stamford Bridge.

Todd Boehly’s new ownership has several implemented changes in the backroom staff including a turnover in medical personnel.

Things haven’t gone well on the pitch either and Chelsea languishes in 10th, level on points with Liverpool having lost a game more.

The Blues are currently on a run of two wins in their last nine games across all competitions, while Liverpool have four in the same period.

Liverpool have played two Premier League games in 2023 and have won neither. The last time the Reds opened the calendar year with the same record was 1993.

And not since 1953 have they lost the first three, a record that has been in place 70 years and one we don’t want to see re-written anytime soon!

With this match heralding the halfway stage of the season, let’s hope the Reds make sure they start the second half with momentum and confidence and not with less than 30 points for the first time since 2014/15 (28).

Klopp was in a jovial mood for his pre-match press conference and when asked about taking charge of his 1,000th game on Saturday, he said:

“I am really blessed, three fantastic clubs gave me an opportunity to do my job.

“When you come in somewhere you never know how it will go and I’m really lucky.

“The beard is now really grey, it wasn’t when I arrived here. I’m not sure if that’s because of the age or because of Liverpool!”

They’re universally unpopular among supporters but a win does get the weekend off to a flyer.

The match kicks off at 12.30pm (GMT) on Saturday but despite the early start, the Anfield crowd will be up for it given a renewed sense of positivity off the back of a better performance in the FA Cup.

It’s the fourth time that the Reds have kicked off at this time so far this season.

Two draws and then a defeat against Nottingham Forest mean we’ve taken just two points from a possible nine when the Reds have been picked for the Saturday lunchtime match.

England’s most highly-rated official has been appointed to this one.

It’s the first time Michael Oliver will have taken charge of Liverpool since the Reds lost their unbeaten home record to Leeds, back in October.

He’s refereed fixtures between Liverpool and Chelsea five times in his career, and the Reds have lost just one of those, an away League Cup tie in 2015.

Liverpool vs Chelsea is live on BT Sport 1 with coverage getting underway at 11.30am before kick-off at 12.30pm.

This Is Anfield’s matchday live blog will also be in full swing, with Sam Millne providing minute-by-minute updates from 11.45am.

Come on you Redmen!