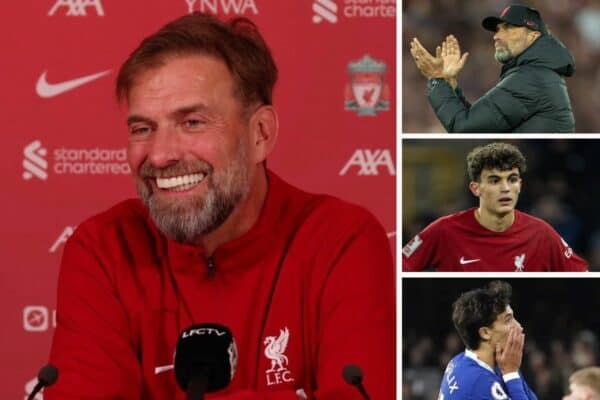 Speaking ahead of Liverpool’s Premier League clash with Chelsea on Saturday, Jurgen Klopp discussed his landmark 1,000th game in management, Stefan Bajcetic and the Blues’ recent spending in his pre-match media duties.

Saturday’s game will bring up Klopp’s 1,000th match in management. An impressive achievement, and something he enjoyed reflecting on.

“The beard is now really grey. That wasn’t the case when I arrived here! I’m not sure if that’s age or Liverpool!

He went on to add that he feels “blessed” and still feels he is in “the best job in the world.”

As he hinted at after the win at Wolves, Klopp has confirmed Darwin Nunez is in contention to feature at Anfield on Saturday.

The Uruguayan missed the last two matches with an unspecified injury.

When asked if the result at Wolves had given him a selection “headache,” Klopp said he would receive more information on the players available to him later on Friday.

“Let me see if I have a headache or if I get some information that gives me another kind of headache!

“I’m completely fine. I hope they’re all fit and all ready, and then we’ll find a good team.”

Many Liverpool supporters are calling for Bajcetic to be handed a first Premier League start, after an impressive outing at Wolves on Tuesday.

When asked if the 18-year-old midfield was “getting closer,” Klopp said:

“Yes. He was always. He’s been injured for two games.

“You cannot be closer to a team than always being in the squad, coming on, stuff like this…”

When pushed on whether he would need to be “slightly careful” with his use of such a young player, Klopp said:

“It doesn’t look like we have to be careful, no.”

Chelsea’s spending – “We have to do it as well”

Klopp couldn’t help but laugh when a question was put to him about their spending.

“Yeah, it will maybe get even worse, or better, I don’t know how you want to say it,” he said.

“Interesting! If the numbers are somehow true, then it’s impressive…

“I can’t see investment stopping in the future, and that means we have to do it as well…

“It’s not worrying that other teams can spend, it’s probably a matter of fact, and we have to react to that as well, but not just that.”