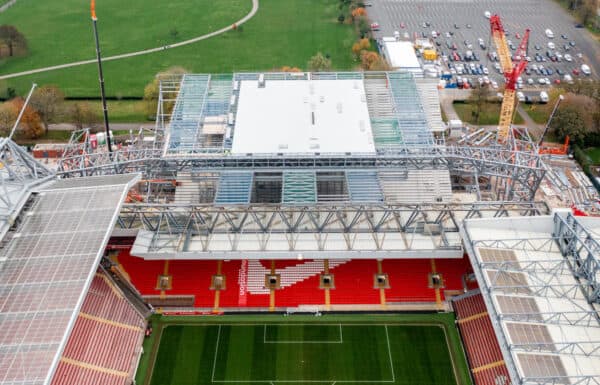 Liverpool’s expansion of the Anfield Road End remains on track, despite the roof cladding sub-contractor going into administration last month.

Back in October, Liverpool announced the next phase of their plans for the redevelopment of the Anfield Road End, which would have seen the existing roof removed.

That work was set to take place during the World Cup break, with Jurgen Klopp‘s side not playing at home between November 12 and December 30.

However, according to Construction News, cladding sub-contractor SD Samuels filed for administration in December, before completing their work.

This comes with the firm “losing a key funder at short notice” which was “amplified by complications on a number of projects,” with a six-figure loss made on a single project.

It is a sad reflection of the reality facing many businesses across the UK, and from Liverpool’s perspective came during a rethink due to logistical issues in the winter.

However, in terms of cladding, a top sheet and a soffit sheet are already in place, with progress still being made with regard to the roofing and overall structure.

The Buckingham Group, who are in charge of the redevelopment works, declined to comment when asked by Construction News whether a new sub-contractor had been appointed.

SD Samuels has, however, not passed on the Anfield job to its sister company and the process of finding a new sub-contractor will take place.

The Anfield Road End expansion, which is in line to cost at least £80 million and add a further 7,000 seats to the stadium’s capacity, is planned to be completed in time for next season.

Liverpool always had a backup plan to remove the existing Anfield Road Stand roof immediately following the final home game of the season in May and that is now the plan going forward.

No adjustments are required to the timescale of the project, with work continuing including the installation of two steel haunches on the northwest and northeast sides of the structure.