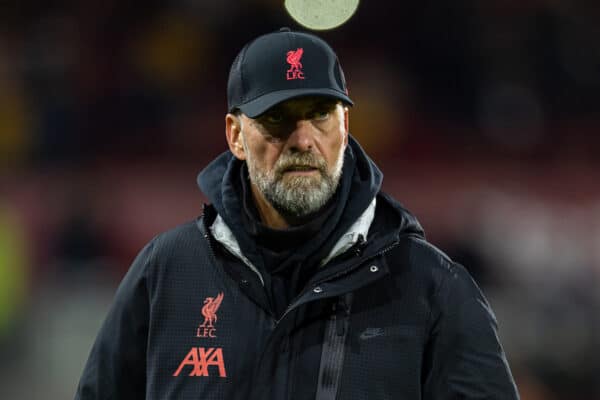 “As damaging as it is embarrassing” – Media highlight midfield issues again

The watching media were left perplexed and concerned by Liverpool’s awful performance in their 3-1 loss away to Brentford.

The Reds were dismal in west London on Monday evening, deservedly falling to defeat and once again gifting their opponents goals.

After four Premier League wins in a row, Liverpool came crashing back down to reality, with a huge amount of work to do in order to achieve a top-four finish.

Here’s how the media reacted to the Reds’ defeat, on a day we will want to forget in a hurry.

A desperately poor performance was bemoaned by some…

Goal‘s Neil Jones felt it was another grim outing by Liverpool’s midfield:

“Jurgen Klopp says Liverpool can’t ‘play Monopoly’ in January, but they certainly can’t afford to ignore the midfield issues which are undermining their bid for Champions League qualification.

“Set-pieces and crosses may have been their undoing in the first half here, but their problems stemmed from the middle of the field, their inability to cover spaces and control games as a result.

“Jordan Henderson had struggled badly against Leicester on Friday, but he could not be blamed here.

“Instead, it was Harvey Elliott toiling on the right of the midfield three, the youngster overrun and unable to offer enough with the ball to compensate for his passiveness without it.

“Klopp has sought to reinvent the 19-year-old as a midfielder, but the experiment is yet to bear fruit. Liverpool need established talent in there, and they need it fast.

“Whether that’s Matheus Nunes, the latest player linked with a move to Anfield, or someone else, something needs to happen in January. If it doesn’t, the Reds can kiss goodbye to the top four.”

The Independent‘s Jamie Braidwood was scathing of the Reds’ display:

“Back in August, it might have seemed unimaginable for Brentford to top their 4-0 thrashing of Manchester United, but they came close here against Liverpool.

“They had the ball in the net four times in the first half, at least, as Liverpool lost their heads and suffered a defeat that is as damaging as it is embarrassing.

“Perhaps the harshest truth that Jurgen Klopp must face is that his team looked like the version of Manchester United those on Merseyside have enjoyed mocking in recent years: weak defensively, lacking leadership across the pitch and facing a real fight to make the top four.

“This was a display that mirrored the defensive vulnerability and fragility of some of their worst displays in the early days of Klopp.”

Kieran King of the Mirror was critical of Liverpool’s defensive woes from corners:

“Every time Brentford had a corner, they looked like scoring.

“The Bees are strong from set pieces but Jurgen Klopp‘s men made it far too easy for them. Ben Mee, Ethan Pinnock and Mathias Jorgensen are Brentford‘s biggest threats and bullied the Reds in the air when they were handed the chance to do so.

“Liverpool were warned on a number of occasions about the threat Brentford have, and were punished in the 19th minute as the Bees took the lead through Konate’s own-goal.

“It was too easy from Liverpool’s point of view.”

“That Liverpool managed to get to halftime not just a single goal down owed more to luck and VAR than their high line actually doing its job.

“And that makes you wonder why Klopp did not make his changes earlier given that it was obvious to everyone in attendance that the hosts had all the momentum and were about to double their advantage.

“The German’s changes at the break actually allowed his team to wrestle some momentum back but, because of his hesitance in the first half, it was too little too late.”

Nick Ames of the Guardian described it as a big “reality check” for Klopp’s team:

“This was a thudding reality check for anyone who thought Liverpool, having dusted themselves down over the winter break, would stroll back into the top four.

“They were beaten here by a bright, resolute Brentford but also by a shambolic opening night’s work by their own back line that ultimately took the game away.

“Ibrahima Konate’s own goal typified that and was followed before half-time by a header from Yoane Wissa, who had already seen two efforts disallowed.”

What now for Liverpool’s top-four chances?

This Is Anfield‘s Mark Delgado assessed the situation, trying to remain positive:

“After back-to-back wins post-World Cup, the Reds had considerably closed the gap on Spurs, who had been fourth. They picked up just one point in the same period, but that draw was away to Brentford, where we’ve just lost.

“They have also now been overhauled by Man United, who the Reds trailed by four before this game, level on matches played.

“As we’re quite clearly now in a battle for a top-four finish only, it’s important to remember previous years in this type of chase: isolated games don’t necessarily matter, but clusters of them can do.

“In other words, across batches of three and four games, can you close the gap? Or open one, once ahead of a team?

“We’ve done that to Spurs in this period, but will have to do the same again after the FA Cup break – and European action will soon be upon us again soon.”

“Tottenham are faltering, Chelsea are struggling and Liverpool remain nothing if not inconsistent.

“And with all that, Manchester United find themselves in the box seat to secure a top-four finish, and with it a return to the Champions League.

“Given the way Klopp’s side are playing, that would be a significant deficit.”

Finally, Lynch ended on an optmistic note, despite the result:

“This is not the first time this season that Liverpool have looked like a team with no chance of a top-four finish.

“That Klopp’s men have put themselves within touching distance of those positions recently says everything about the flaws of their rivals and gives hope that, with so much of the campaign remaining, Champions League qualification isn’t out of the question.