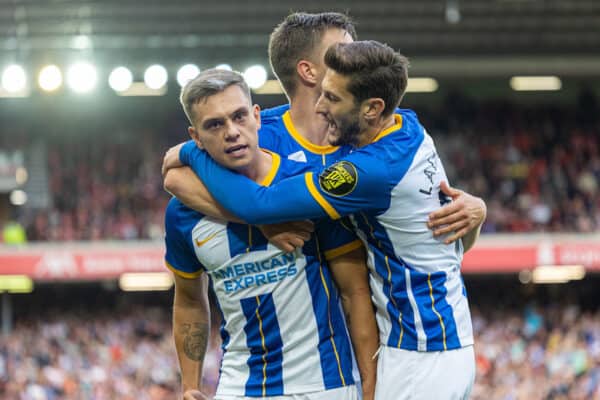 Brighton are in ridiculous goalscoring form ahead of Liverpool clash

Liverpool could not ask for a worse time to face Brighton than this weekend, with Roberto De Zerbi’s side in ruthless goalscoring form of late.

It was a common belief under Graham Potter that once things clicked, they would become a force, with the underlying stats backing that up.

Potter left for Chelsea at the start of September, and now finds himself under increasing pressure as he struggles to coax form out of a bloated and confused squad.

Meanwhile, his replacement at the AMEX, former Benevento, Sassuolo and Shakhtar manager De Zerbi, has successfully got a tune out of a hugely talented group.

Heading into the weekend, Brighton are eighth in the Premier League, two points and two places above Chelsea and just one point behind Liverpool in sixth.

And with Liverpool in something of a crisis as they prepare for their trip to Sussex, the frightening reality is that, in their last nine games, the Seagulls have scored 25 goals.

That is an average of 2.8 goals per game, with De Zerbi’s side scoring three times in three of those games, four times in two and five in their last outing against Middlesbrough in the FA Cup.

Only once in that stretch have they failed to score, that being a 0-0 draw with Charlton in the Carabao Cup which ended in a 4-3 penalty loss.

This comes after a run of just four goals scored in their first five fixtures under the Italian, three of which came in his first game in charge – the 3-3 draw at Anfield.

In total, 10 different players have found the back of the net in De Zerbi’s 14 games in charge.

On Saturday, Alexis Mac Allister came off the bench for his second appearance since winning the World Cup and netted twice in 45 minutes.

Twenty-three of their 32 goals have come from open play, which is the third-most in the English top flight behind Man City (30) and Arsenal (29).

Liverpool have scored 17 and conceded 12 in their last nine games in all competitions.