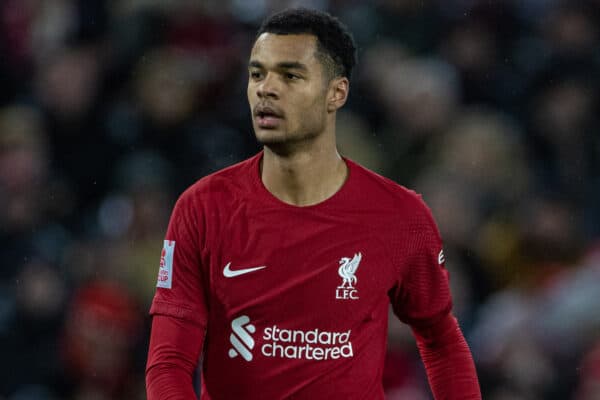 Cody Gakpo‘s Liverpool debut will come as part of Liverpool’s starting XI tonight as the Reds’ defence of their FA Cup crown gets underway against Wolves.

There’s been a number of days to stew over and subsequently forget the first game of 2023, and now it’s time to get off on the right note at Anfield for the new year.

Alisson will be out to keep only Liverpool’s ninth clean sheet of the season behind a changed back four.

Virgil van Dijk‘s injury sees a partnership of Ibrahima Konate and Joel Matip at centre-back, with Trent Alexander-Arnold and Andy Robertson taking up their usual positions.

In midfield, Klopp has opted for Fabinho, Jordan Henderson and Thiago.

And the strong XI is rounded off by Mohamed Salah, Darwin Nunez and debutant Gakpo in attack.

Speaking prior to the match, Klopp insisted “it was always clear we will line up as good and strong and experienced as we can” thanks to the gap between games.

On the bench, Liverpool have the likes of Naby Keita, Harvey Elliott and teenager Ben Doak to turn to. Meanwhile, Reds target Matheus Nunes has been named as a substitute for the visitors.