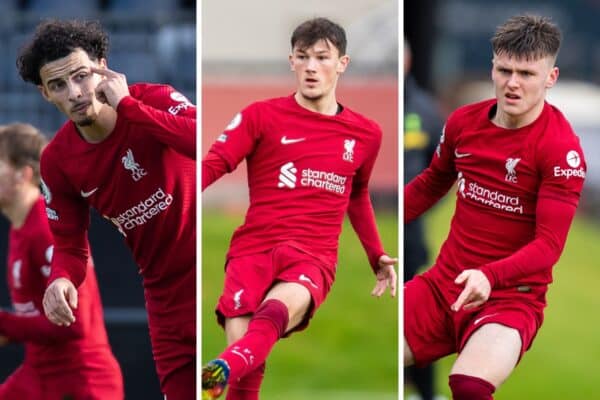 Calvin Ramsay saw red and Curtis Jones played 45 minutes as Liverpool’s under-21s saw their 2023 start with a 2-0 defeat at the hands of Tottenham, with Jurgen Klopp watching on.

Jones and Ramsay have made nine appearances between them this season, with injury curtailing any influence they hoped to have had for Klopp’s first team thus far.

Neither were named in Liverpool’s matchday squad against Wolves on Saturday and instead were in Barry Lewtas‘ starting XI for their first game of 2023, as too was Ben Doak who made a brief cameo off the bench at Anfield.

Liverpool’s No. 17 had not played more than a half of football since the start of November but he took a valuable step toward full match fitness with 45 minutes in midfield against Spurs.

The afternoon was not as productive for Ramsay, however, having been shown a straight red card after just 22 minutes, adjudged to have tripped Romaine Mundle as Liverpool’s last man.

With only 93 minutes for the first team under his belt, it’s far from ideal for a player in need of match sharpness.

The 10-man Reds were on the back foot but still posed a threat, while Harvey Davies had plenty to do to keep Spurs at bay and only faltered in first-half stoppage time as Jamie Donley scored.

For the start of the second half, Lewtas swapped Jones and Doak for Jake Cain and Luca Stephenson in what will almost certainly have been two pre-planned substitutions.

The young Reds asked questions of Spurs, Bobby Clark saw an effort tipped onto the upright and Cain found the crossbar after following in another effort from 17-year-old Clark.

No breakthrough could be found, though, and Tottenham wrapped up the result in the 80th minute with a looping header from Malachi Fagan-Walcott as Klopp and Vitor Matos watched on.

On a positive note, there was a return to action for Harvey Blair off the bench, who last played in October.