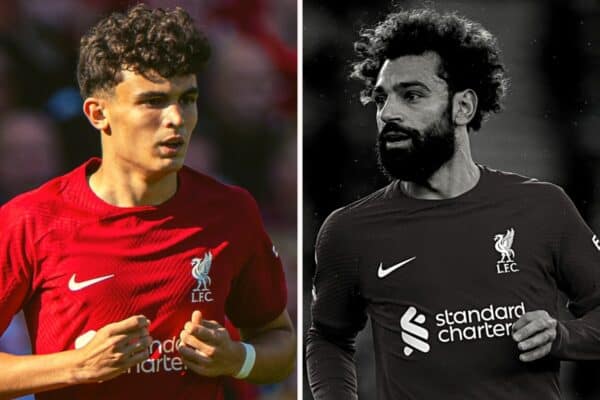 Liverpool played out a drab 0-0 draw with Chelsea at Anfield on Saturday afternoon, with a point leaving the Reds eighth in the Premier League as things stand.

Kai Havertz’s disallowed goal in the first half was just about as eventful as things got in front of goal, with neither side deserving three points.

In truth, there wasn’t a lot either side could takeaway from a match lacking in any real quality from the very start.

Here, though, we analyse three positives and three negatives from the Reds’ perspective.

POSITIVE – 2 clean sheets on the bounce

Considering this is a Liverpool team that conceded eight goals from their three league matches against Brentford, Wolves and Brighton earlier this month, you have to take some encouragement from the fact they’ve managed to keep out Wolves and Chelsea in their last two.

Jurgen Klopp greeted a question on the topic with a big grin in his post-match press conference.

“Massive,” he said when asked about the importance of two consecutive clean sheets.

“Directly after the game, you can’t forget the chances they had, but tomorrow I won’t remember them anymore. It’s just a clean sheet, and it feels really good.”

Since that defeat at Brighton, the Liverpool boss has put an emphasis on his team becoming more “compact” and solid in defence.

In that regard, this was perhaps another step in the right direction. The challenge, now, is to ensure that solidity continues.

NEGATIVE – Time to worry about Salah?

Is it time to start questioning the contributions of someone who became the highest-paid player in the club’s history last summer? You could certainly argue that Liverpool need more from Mohamed Salah right now.

I know Liverpool have much bigger problems, but Mo Salah's form is surely a major concern.

He hasn't played well in months. He looks incapable of beating a defender one v one. His shooting is erratic and rushed. What does he actually contribute at the moment?

Even off form, Salah is better than most attacking players, but he's way off it at the moment.

Don't think he's been the same since AFCON last Jan, whether it be his decision-making, finishing or general influence.

Not being helped with poor service, but still merits criticism.

The Egyptian has scored twice since the resumption of the Reds’ season in December, with Alex Oxlade-Chamberlain the only Liverpool player to find the net in any of their last four league games.

Here, Salah never really looked a threat up against a Chelsea defence that have struggled in recent weeks. He’s now gone three consecutive league games without a shot on target. The last time this happened was in April 2022.

At a time when the Reds are clearly struggling all over the pitch, they need more from their talisman.

POSITIVE – First of many appearances for Bajcetic

After a standout performance against Wolves in midweek, it was pleasing to see Klopp hand Stefan Bajcetic another opportunity at the base of the midfield against Chelsea.

It certainly wasn’t the easiest or prettiest game to be thrown into, but the Spaniard didn’t do himself any harm.

As toothless as Liverpool were there, thought Bajcetic did well again – especially playing with a yellow for much of the game. Back-to-back clean sheets and the midfield not getting sliced open anywhere near as often with an 18-year-old at DM.

The boss spoke in glowing terms of Bajcetic before and after the game, perhaps a sign that he is in line for more league starts in the coming weeks.

In truth, the midfield didn’t offer a great deal, but you’d have to say it looked more cohesive than the Fabinho, Jordan Henderson and Thiago trio has done in recent weeks.

And despite Liverpool now having several days to prepare for an FA Cup clash at Brighton, there aren’t many supporters clamouring for Fabinho to come back into the side ahead of Bajcetic.

NEGATIVE – An alarming lack of ideas

You’ve got to admit, it’s sad to see how far off the pace this Liverpool team currently are, considering the position they were in less than 12 months ago.

As 0-0 draws go, this was about as dull as it could get, and the Reds more than played their part in contributing to a game that was played at a very poor standard.

Following an impressive performance from Harvey Elliott on the right side of Liverpool’s attack at Wolves, you have to question why Klopp made the choice to deploy him in a left sided role in this game. The solution would surely have been to use Elliott from the right, Cody Gakpo on the opposite side, and Salah through the middle.

Watching Liverpool just lump the ball into the box feels so wrong.

After the game, Klopp insisted the performance was “a little step” in the right direction. That, if anything, shows how far this team have fallen, given the fact they were at home to the team who are currently sat 10th in the league table.

POSITIVE – Nunez is back

Had he been fully fit, there’s no doubt Darwin Nunez would have started this game, considering how little Liverpool’s attack are offering at present.

A rough diamond, yes, but the Uruguayan certainly makes things happen, and he did so again in his 30-minute cameo off the bench at Anfield on Saturday.

Alex Oxlade-Chamberlain, Elliott and Fabio Carvalho have all been asked to fill in further forward in Nunez’s absence, but Klopp will surely now be hoping to give a Salah, Gakpo and Nunez attacking trio an extended run of matches.

Liverpool’s January addition certainly hasn’t arrived at the club at the most suitable of times, and you get the feeling he’ll massively benefit from his first goal for the club.

Lining up in a relatively unfamiliar No. 9 role again, Gakpo snatched at two first half opportunities, and tested Kepa Arrizabalaga after linking up with Nunez in the second half.

Klopp will be hoping the Dutchman will benefit from Nunez’s return to fitness, with a return to his more comfortable left-sided attacking role perhaps on the cards at Brighton next week.