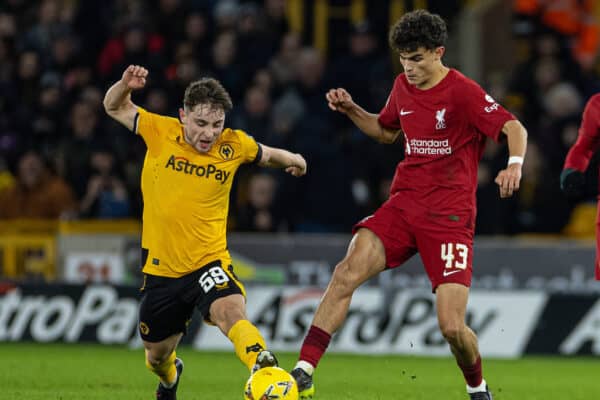 Liverpool stopped the bleeding with an improved display in the FA Cup replay at Wolves, with Harvey Elliott and Stefan Bajcetic making a big impact.

Jurgen Klopp made eight changes from the dismal 3-0 defeat away at Brighton, and despite having to somewhat hang on towards the end there were a number of positives to take from the performance.

There is still plenty of work left to be done, but having booked a place in the fourth round, scored the opening goal and gotten back to winning ways for the first time since the New Year, the picture looks slightly rosier.

Elliott grabbed the goal to split the two sides, and 18-year-old Bajcetic continued to enhance his reputation with 75 minutes befitting of an experienced first-teamer.

At a time when the overall mood around the club isn’t at its highest, there were extremely encouraging signs that the future is bright in the hands of Liverpool’s most talented youngsters.

A wonderstrike as Elliott shines

He waited and waited as he brought the ball deep into Wolves’ half and assessed his options, then the 19-year-old blasted it past Jose Sa to put Liverpool in front.

It was an assured performance in a more advanced role for the youngster:

Harvey Elliott is 19 and people write him off. It's genuinely embarrassing.

He's a fantastic young player with a massive future – he will have bad games and be raw in aspects of his play because he's 19!

Believe it or not, Gerrard could be poor at that age, too. It's normal.

Elliott looking loads better in the Salah position than he has in midfield lately.

Elliott has been getting a bad rap lately. Play to his strengths and he will shine

Harvey Elliott.What about it. Sensational strike.

Absolutely made up for Elliott! Great strike! #WOLLIV

The midfield has been the topic on everyone’s lips throughout this recent run of form and results, but there were much more encouraging signs as the manager opted to freshen things up for the cup tie:

Would just play this midfield the rest of the season I think. 90 minutes every game.

klopp after giving us this midfield pic.twitter.com/zJSnm3wDi7

Best defensive display in months. Looked organised, compact, tenacious. Love it. That was a big boy win that under the circumstances.

Amazing what legs in midfield can do.

– Analyst Obinna in the comments.

Can’t see it but they’ll be few complaints if we line-up with that same midfield on Saturday. Having legs in there made a world of difference. Bajcetic, while slight, is some talent.

A huge result for the manager

A shift in momentum was almost as important as the victory itself, and as expected there was a huge show of solidarity towards Klopp from the travelling Kop and fans online:

Really really enjoyed the performance tonight. Quite emotional hearing the fans sing the Klopp song at the end too.

Idk what Klopp has done to this team within the space of 3 days but we look like a completely different team. The pressing is back and playing very well.

Those last minutes made me 20 years older…? Maybe not a beautiful win tonight, but it's beautiful having a win! Lots of good performances, let's build on this
So happy hearing the Klopp song from the stands????#WOLLIV #EmiratesFACup #YNWA pic.twitter.com/zcfhurLLWi

IM SO GLAD THAT JURGEN IS A RED

The Spaniard once again did himself no harm after being trusted from the start by Klopp, displaying ability beyond his years before being replaced with 15 minutes remaining:

Bajcetic is so impressive every time you see him. I can't see there being a good argument for him not getting a run as a starter when he's regularly outshining those with significantly more playing time than him this season.

Baj?etic. Will run forever, will throw himself into every tackle. Just needs to bulk up a bit and he’ll be a monster. Bounces off players going in for challenges and sometimes can be knocked off the ball a little too easily.

“I don’t care what anyone says, Bajcetic should be starting every match from now til the end of the season. I’ll take him over Fabinho.”

– El Jefe in the comments.

Have to say Stefan Bajcetic looks mature beyond his years. So composed in tight situations, has a tiny bit of Wijnaldum in that respect

He’s listed as 6ft 1in too – doesn’t look it, but if he is, then fits bill as a Klopp holding midfielder to shield defence on high balls#LFC

What a display from Stefan Bajcetic there and cracking strike from Harvey. A step in the right direction even if that direction is towards Brighton!