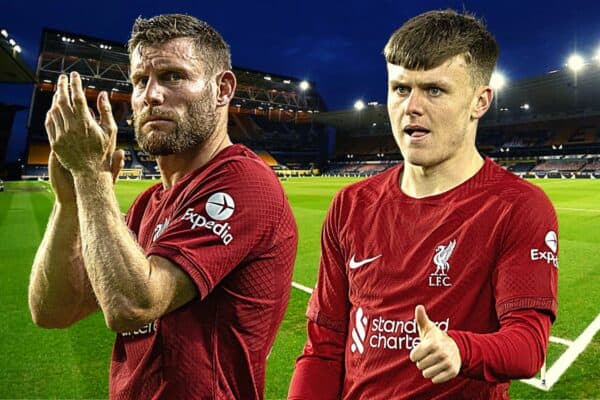 Liverpool take on Wolves in their FA Cup third round replay on Tuesday, with James Milner and Ben Doak able to set contrasting records should they get themselves on the scoresheet at Molineux.

Should he find the net, Milner would become Liverpool’s oldest ever scorer in the FA Cup at the age of 37 years and 13 days – beating Billy Liddell’s record of 36 years and 15 days set in 1958.

A goal from Doak would see him become the Reds’ youngest ever scorer in the competition at the age of 17 years and 67 days.

In the first game at Anfield, Trent Alexander-Arnold became the fifth-youngest Liverpool player to reach 250 appearances for the club, aged 24 years and 92 days.

Two goals will see the Reds reach 850 goals under Jurgen Klopp in all competitions.

Liverpool have reached the fourth round in every season since 2011 except one year – 2019 – when they were beaten by…Wolves.

They have won only one of the last six FA Cup meetings between the sides, losing four to add to last week’s draw.

The Reds have lost four of the five FA Cup encounters at Molineux and have not beaten Wolves there in the Cup since February 1923. That is their only clean sheet against Wolves in the competition.

Liverpool in the FA Cup

Liverpool are looking to retain the trophy for the first time in their history. The last time they defended the trophy, in 2007, they went out in round three, beaten 3-1 at Anfield by Arsenal.

Last season, the Reds played only once on an opponents ground in their trophy lifting campaign – a 1-0 quarter-final win at Nottingham Forest, with Diogo Jota scoring the goal.

The Reds have faced four penalty shoot-outs in the FA Cup and have won each one.

Their last 3 defeats in the FA Cup have all come away from Anfield – at Wolves in 2019, Chelsea in 2020 and at Manchester United the following year.

Liverpool last played in a replay in 2020, defeating Shrewsbury 1-0 at Anfield. They last lost in one in 2016 when they lost 2-1 to West Ham at Upton Park.

The last time Liverpool drew 2-2 at home in Round 3 was in 1974 was against 4th Division Doncaster Rovers. The Reds won the replay and went on to lift the Cup for the second time.

The 3-0 defeat at Brighton on Saturday was Liverpool’s heaviest loss of the season and their biggest domestic loss in almost two years, since losing to Man City at Anfield in February 2021.

In each of their last three defeats – at Man City in the Carabao Cup and at Brentford and Brighton in the league – Liverpool have conceded three goals.

Klopp’s side have failed to win any of their last three games. The last time they failed to win four on the spin was in October 2018. They have won just five of their 14 games away from Anfield this season.

Not kept a clean sheet in the last 7 games since the League Cup penalty shoot-out win over Derby in November.

Wolves on the rise

Julen Lopetegui’s side have not lost in normal time in any of the last four outings.

They leapt out of the Premier League bottom three at the weekend with a 1-0 home win over West Ham, Daniel Podence scoring the game’s only goal. That victory saw them keep their first clean sheet in six matches.

Last season, Wolves went out in round four, losing 1-0 at home to Norwich, who themselves lost to Liverpool in the following round.

They have gone beyond round three only four times in the last 11 seasons, winning only nine times in the competition in that period.

Andre Marriner will be in charge at Molineux.

The home team have lost the last four games he has taken charge of, while it’s more than 13 years since he oversaw a game between the teams, a 2-0 Liverpool win at Anfield in December 2009.