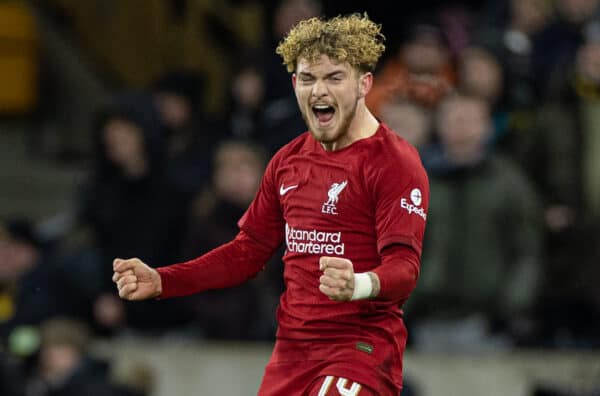 After scoring a brilliant winner in Liverpool’s FA Cup third round replay win at Wolves, Harvey Elliott admitted he feels he hasn’t performed to the best of his ability since the World Cup.

The 19-year-old was one of eight changes Klopp made to the side that were beaten 3-0 by Brighton on Saturday.

Having played the majority of his football in midfield this season, Elliott looked more comfortable in a right-sided attacking role at Molineux.

His brilliant first-half strike proved to be the winner, and speaking after the game, he admitted he breathed “a big sigh of relief,” having been disappointed by his recent individual performances.

“Yeah, I feel like I’ve been judged a bit on assists and goals, and it’s definitely something I’ve been working on,” Elliott told BBC Sport.

“I just felt like it was the right opportunity, and thankfully it came off today.

“It was a big sigh of relief, to be honest, because I feel like, personally, I haven’t been at my best since the World Cup.

“To get the goal, it was good for my confidence, and hopefully I can take it into the weekend now.”

The goal came in the 13th minute, as Elliott carried the ball into Wolves‘ half, before firing past Jose Sa from outside the box.

James Milner, who was at right-back, helped create the opening for Elliott with an overlapping run, and Elliott says the 37-year-old encouraged him to take the shot on.

“If he’s screaming it then I’m just going to have to do it!

“As I said, it’s down to me to provide assists and score goals, and I felt like I had the perfect opportunity to do that.

“Maybe he can encourage me a bit more to shoot, because it definitely worked!”

Next up for Liverpool is a Premier League clash with Chelsea on Saturday, with a 10-point gap between the Reds and Man United in fourth.

Elliott finished by thanking the club’s fans for their loyal support in what has been a difficult period.

“The fans are a big help as well, they’re always by our side no matter what,” he continued.

“A massive thanks from myself and the team for always sticking by us.

“We’ve got the best fans in the world, and we go into each and every game with the best support.

“For us it’s massive, and we just want to go out there and perform to the best of our abilities and put on a show for the travelling fans.

“I know it was freezing tonight, so a massive thanks. Hopefully we sent them hope happy.”