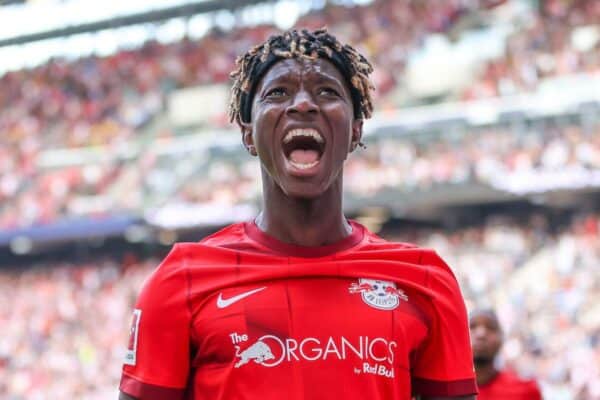 Liverpool’s search for midfield reinforcements has seen another name added to their list of potential targets in RB Leipzig’s 24-year-old Amadou Haidara.

Though the Reds are expected to have completed their business for the mid-season transfer window, there remains a chance a late surprise is pulled.

Any further addition to the squad would likely be subject to any departures, in the interest of squad size rather than raising funds, with Nat Phillips the most feasible sale.

And with Rhys Williams already recalled from Blackpool as the centre-back’s replacement, the obvious area in need of bolstering is in midfield.

Jude Bellingham is the priority target for the summer, while a deal is anticipated for Wolves‘ Matheus Nunes, and Moises Caicedo and Teun Koopmeiners have also been reported as targets.

Now, the Independent‘s Miguel Delaney – who was among the first in England to confirm interest in Darwin Nunez last summer – has named Haidara as another option.

This comes after Leipzig rejected a bid from Brighton, who appear to be making steps to replace Caicedo before he is allowed to leave.

“Leipzig do not want to allow Haidara to go without an adequate replacement,” Delaney writes, with the player’s contract including a summer release clause.

He adds: “Liverpool and Man United have looked at Haidara in the past, but any revived interest is only likely to come at the end of the season.”

If the cogs fall into place, though, there is a chance that any accelerated pursuit from Brighton could force Liverpool into early action.

It is even possible that this news comes from Haidara’s camp in an attempt to push through a winter switch, perhaps with a view to joining a side already in the Champions League.

Haidara turns 25 later this month, and is a box-to-box midfielder adept at winning the ball off the opposition and moving it up the pitch with progressive passes.

He is not yet at the elite level that many fans would be hoping for of a new signing, though as Jurgen Klopp recently explained, that is part of the process to bring in players before they become “unaffordable.”

“In these kinds of things, it’s all about timing,” he said of the £44 million deal for Cody Gakpo.

“Getting these boys in the right moment, when they didn’t already score 55 goals per season.”

It should be noted, of course, that as with Luis Diaz a year previous, the pursuit of Gakpo was brought forward six months due to strong interest from elsewhere.

Could the same play out when it comes to Haidara?