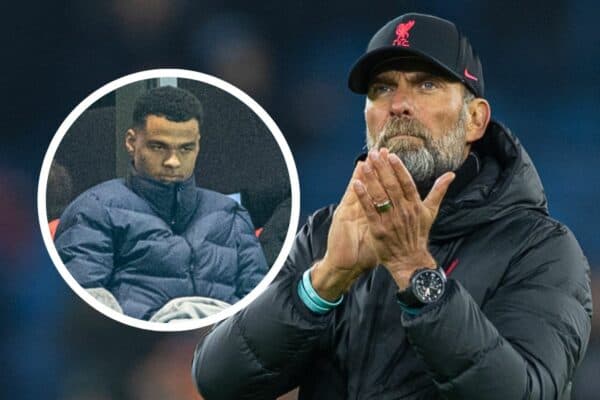 Cody Gakpo is not involved in Liverpool’s squad to face Brentford on Monday, with the necessary paperwork in order for him to feature yet to be finalised.

Speaking last week, Jurgen Klopp said he did not expect his new signing to be available to face the Bees, and that has turned out to be the case, with Gakpo’s debut likely to come in Saturday’s FA Cup tie with Wolves.

The Dutchman was in the stands for the Reds’ victory over Leicester on Friday, and won’t be able to train with his new team-mates until the formalities have been completed.

Klopp says he hopes Gakpo will get permission to begin training on Tuesday, with no new updates on whether all the paperwork has gone through.

“I have no news,” he told Sky Sports before Monday’s game at Brentford.

“We hope he gets permission tomorrow to train fully with us, that would be great but that’s all I know.”

In his absence, Alex Oxlade-Chamberlain, who is making his 100th Premier League appearance for the Reds, continues on the left side of Liverpool’s attack.

Elsewhere, Jordan Henderson is missing due to concussion, while Roberto Firmino and James Milner were not deemed fit enough to be involved.

Ibrahima Konate, though, makes his first appearance since his return from the World Cup, while Harvey Elliott is fine to start after picking up a knock against Leicester.