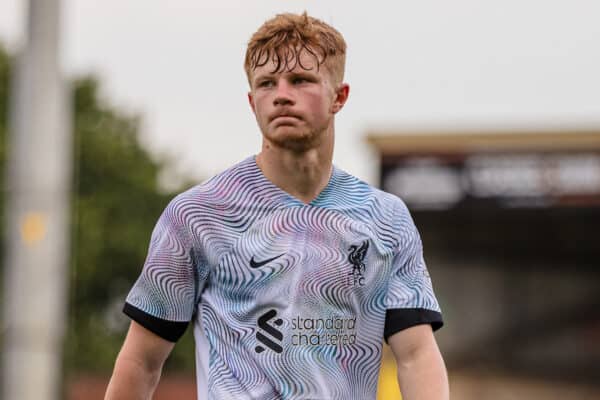 Unlike the first team, Liverpool’s under-21s are capable of scoring the first goal but against Man United they could not keep hold of their lead, succumbing to a late 2-1 defeat.

Barry Lewtas had a strong side at his disposal for the second Premier League 2 fixture of 2023, despite a positive start, the end result was the same as the first match of the year.

Billy Koumetio, Luke Chambers, Bobby Clark and Melkamu Frauendorf joined the likes of Jarell Quansah, Mateusz Musialowski and Luca Stephenson in the XI, the latter having an immediate scoreboard impact.

Stephenson, a standout in midfield throughout the match, got the Reds off to a flying start with a curled finish after just four minutes, capitalising on Man United‘s failure to clear their lines from a Liverpool corner.

Musialowski and Clark asked further questions of United in an electric start, but goalkeeper Radek Vitek was up to the task and helped swing momentum his side’s way.

By the time the clock ticked into the 19th minute, United had levelled the scores through Joe Hugill, who was quickest to capitalise in the goalmouth after Liverpool’s loose play.

The second half picked up from where the first left off, with chances falling to both sides.

Liverpool had Quansah to thank for a timely tackle at one end while United will have been relieved to see Lee Jonas’ header fly over the crossbar as Lewtas’ side continued to push for the winner.

That, though, fell the way of Man United with Hugill, again, the goalscorer with a simple tap-in after the hosts opened Liverpool up on the right flank to make it 2-1.

The young Reds had moments to peg United back and were worthy of points after taking control at the start of each half, but ultimately could not find the finishing touch.

It is the second league defeat since the turn of the year for the U21s after a 2-0 loss to Tottenham, but they still remain just five points off Man City at the top.