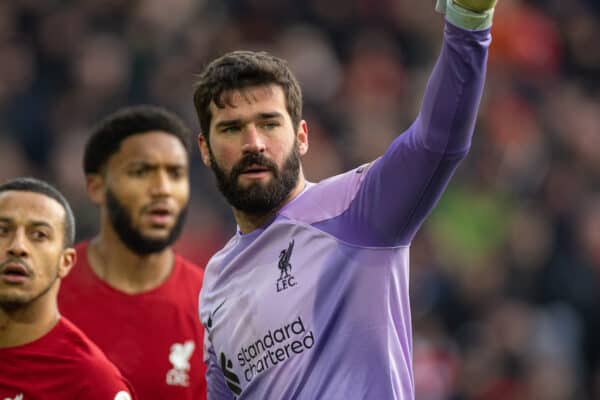 Liverpool 0-0 Chelsea: Player Ratings – What the media and statistics say

There were forgettable performances galore in Liverpool’s 0-0 draw with Chelsea, but some defenders did at least impress.

The Reds could only play out a lacking-in-quality stalemate with the Blues on Saturday, in a result that was no good for either team.

Windy conditions didn’t help the contest, in terms of entertainment, and neither side did enough to justify all three points.

Unsurprisingly, Alisson (7.3) was Liverpool’s highest-rated player overall, on a day when he got his first clean sheet in the league since October.

One shanked clearance aside, the Brazilian’s handling was immaculate all afternoon and his decision-making was also spot on.

TIA’s Mark Delgado hailed one “brilliant” save from Alisson during the first half, as well as saying he was “quick off his line.”

Next in the reckoning was Ibrahima Konate (7.1), who produced an assured and physical showing at Anfield.

The 23-year-old was “solid” against Chelsea, according to the Echo‘s Ian Doyle, while FotMob pointed out that he made five clearances and four interceptions.

Andy Robertson (7.0) and Thiago (7.0) shared third place between them – the pair were certainly two of the Reds’ more influential players.

Delgado said that the former’s “surging runs” made him the “only real outlet” at times, and Doyle said the latter was “keen to inject some tempo into the play.”

There were some disappointing performances for Liverpool, on a hugely frustrating afternoon, and Harvey Elliott (5.7) got the lowest average.

The 19-year-old started in an unfamiliar position on the left before moving into midfield, and he, like many others, struggled to create chances and played only three passes into the final third.

Next up for Liverpool is the FA Cup fourth round trip to Brighton next Sunday (1.30pm UK).