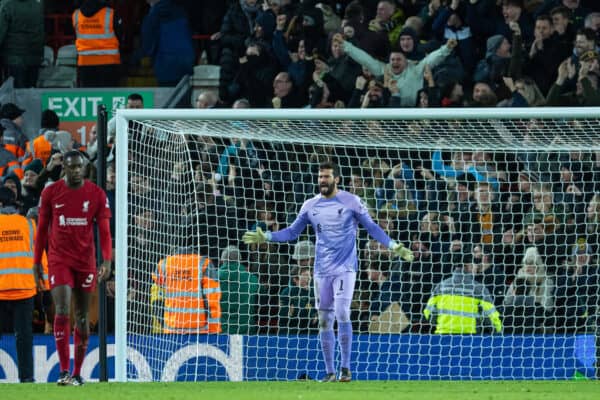 The same problems were on show as Liverpool were held to a 2-2 by Wolves in the FA Cup, meaning they will now head to Molineux for a replay.

While Wolves manager Julen Lopetegui made nine changes, swapping out Liverpool target Matheus Nunes, it was full strength for Jurgen Klopp and a full debut for Cody Gakpo.

It was a fast start from a Reds side in need of a response, with Gakpo having an early sighter in the opening five minutes while the visitors struggled to string passes together.

But after the game settled, Alisson gifted Wolves an opener, with shades of Loris Karius in Kyiv as he passed it straight to Goncalo Guedes for a tap-in and 1-0.

Liverpool threatened to crumble thereafter, with Thiago given the runaround in midfield, but a moment of brilliance saw Darwin Nunez level the scores just before half-time.

It came via a stunning pass from Trent Alexander-Arnold towards the back post, with Nunez watching it all the way and touching home with his left foot on the charge.

After a sour spell in the stands, the crowd roared Liverpool back into life at the start of the second half, and they were rewarded with an early Mohamed Salah goal from a Gakpo assist.

Gakpo cut inside from the left wing and played a right-footed pass over the top for his new strike partner, and though Salah was in an offside position, the intervention from Toti ensured his fine finish stood.

There was a big chance for Rayan Ait-Nouri at the other end soon after, but Alisson held firm with a strong stop when one-on-one with the wing-back.

A triple change from Lopetegui, including the introduction of Nunes, gave Wolves renewed impetus, and within five minutes it led to another goal as Hwang Hee-chan managed to squeeze the ball past Alisson.

Klopp then rolled his dice and turned to an untested midfield three of Thiago, Naby Keita and Harvey Elliott – a never-before-seen trio in the middle of the park.

Though they dominated the closing stages – with Ben Doak eager and impressive – there was no breakthrough for Liverpool, who must now replay the tie.

That replay is set to take place in the week commencing January 16.